iOS, Android app downloads surpass a billion in one week 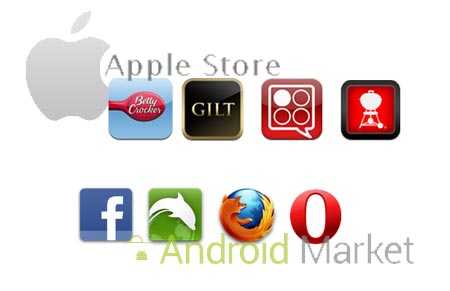 With the iOS and Android platforms witnessing app downloads of over a billion during a single week, it appears that a bunch of gadgets weren’t the only ones to sell like hot cakes this holiday season. The new record was set during the last week of December between Christmas day and New Year’s Eve.

Well, breaking this one billion download barrier is apparently something new to both platforms. Based on a report published on the official Flurry blog, the year 2011 ended with what they called a ‘holiday power week’ in which iOS and Android-run device users downloaded a record-setting number of around 1.2 billion apps, an estimated increase of 60%. Before this, the penultimate week marked 857 million downloads that lasted until December 25. 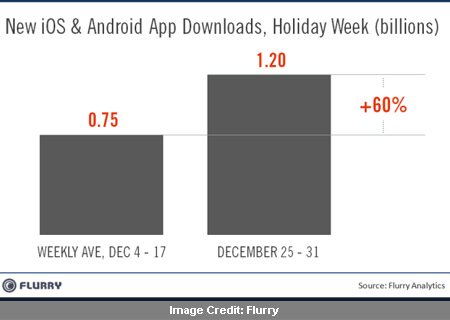 The mobile application analytics company provided a list of the top countries that played a role in setting this record. From a total of 1.2 billion, the U.S. stands tall with 509 million downloads, followed by China and UK with 88 and 81 million downloads, respectively. There were many other nations hovering between the 9 and 41 million marks. Besides these, the study also states that an estimated 6.8 million iOS and Android devices were activated on Christmas alone. The last week of 2011 was stated to have seen over 20 million iOS and Android device activations. 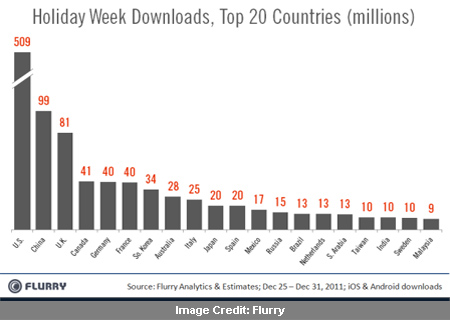 To sum it all up, the period of December 25 to 31, 2011 witnessed more iOS and Android device activations as well as application downloads compared to any other week of the year. The guys over at Flurry have also speculated that in 2012, the 1 billion downloads per week scenario is likely to become something common.