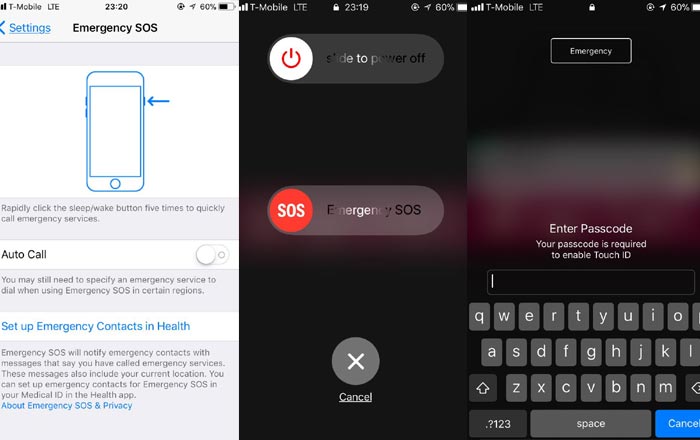 iOS 11 has got some interesting new features in store for users, with developers and beta users alike diving into it for hidden abilities. A Twitter user named Kia recently came across what many are calling a ‘cop button’ tool which allows people to disable Touch ID without anyone becoming the wiser.

To recall, Apple had introduced an Emergency SOS feature in iOS 10.2 for certain regions like India. To activate it, a person would have to press the sleep/wake button 5 times in a row to contact emergency services and send out an SMS to a list of pre-set contacts.

Emergency SOS is now making its way to everyone with iOS 11. The interface is a bit different from the current one though, as pressing the sleep/wake button in succession opens up a second page that lets you slide to power off, slide to activate Emergency SOS, or Cancel.

Invoking this setting automatically disables Touch ID and requires a passcode to unlock the iPhone. This is where the cop button part comes in, since law enforcement won’t be able to force people to open up their handset using their fingerprint.

Legally speaking, police in the US can make individuals unlock their iPhone via Touch ID, but can’t compel them to use their password. Apple’s secretive new feature would thus allow people to discreetly disable Touch ID and protect their information.

Of course, there are other ways to disable Touch ID. Still, those require people to power down and then switch on their iPhone, head to the Settings menu, or use the wrong finger till a passcode is required. Using Emergency SOS is a lot less time consuming and doesn’t even necessitate any kind of interaction with the screen.