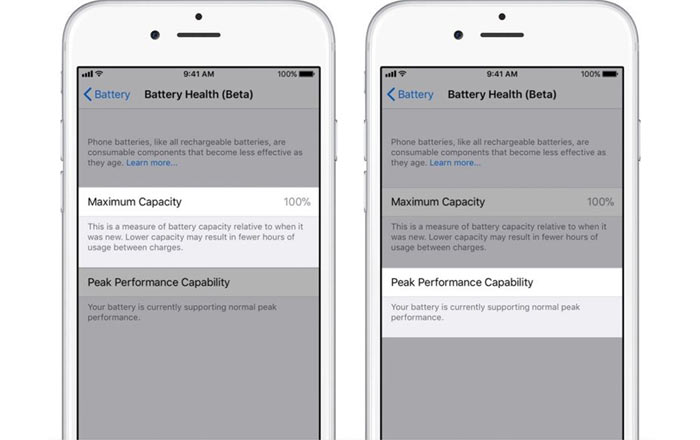 Apple has officially begun seeding the iOS 11.3 beta update to developers, finally introducing the new Battery Health feature which everyone’s been waiting for. It’s been placed inside Settings > Battery and is still in testing, so it might change when it’s released to the public.

For now, Battery Health tells users 2 things about their iPhone. One is the maximum capacity of their device’s battery and the second is its peak performance capability. Before all this though, Apple starts off by warning users that iPhone batteries are like any other rechargeable battery, in that they become less effective as they get older.

With this cautionary message out of the way, the first thing you can find information on is the Maximum Capacity. This is a measure of battery capacity relative to when it was brand new. Lower percentages equal fewer hours of power between charges. 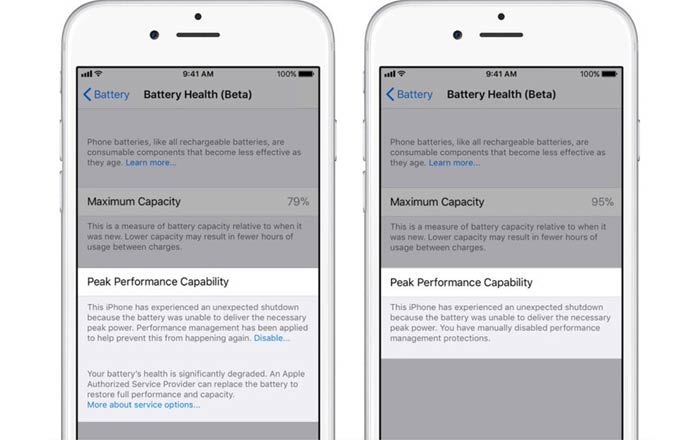 For instance, a rating of 100% means that the iPhone’s battery is in perfect health, but 79% means that it’s not functioning like it used to. The other little nugget of information concerns the Peak Performance Capability. If the battery is working fine, this section will simply say that it’s currently supporting normal peak performance.

If things aren’t that rosy, Apple will inform the user that their iPhone has experienced an unexpected shutdown because the battery wasn’t able to deliver the required peak power. Performance management has thus been applied to stop this from happening again. Then there’s a blue highlighted text which says “Disable.”

This is followed up by a message stating that the iPhone’s battery’s health has significantly degraded and Apple can replace it to restore it to full performance and capacity. As per a support document, performance management is automatically switched on every time there’s a sudden shutdown.

Once power management has been switched off via the Disable option, individuals won’t be able to switch it on again until their iPhone blacks out. At that point, it’ll become active and people can either let it be or disable it again.

Performance management is currently found on the iPhone 6, iPhone 6 Plus, iPhone 6S, iPhone 6S Plus, iPhone SE, iPhone 7, and iPhone 7 Plus. The iPhone X, iPhone 8, and iPhone 8 Plus have been spared for now as the smartphones are new and not experiencing any shutdown problems.