iOS 10 to warn iPhone users when Lightning port gets wet

Apple has apparently built moisture-detecting properties into its smartphone, enabling iOS 10 to warn iPhone users when the Lightning port is wet. While the company hasn’t actually made an announcement regarding the same, the YouTube video posted below captures iOS showing off this trick. Obviously, the revelation has lead to speculations that the upcoming iPhone 7 will be waterproof.

Unlike rivals Samsung and Sony, Apple has steered clear of waterproofing its handsets in spite of popular demand for such a feature. There’s plenty of evidence on the internet about the iPhone 6S being the most water-resistant of the company’s smartphones till date. But Apple has never officially declared it to be able to withstand dunks.

iOS 10’s “liquid has been detected” warning skill could simply have been added to issue a timely alert to users about the possibility of a short circuit or any other water-related injury to their iPhone. It may be able to save Apple and the concerned customer the inconvenience of having to get a liquid-damaged iPhone repaired. Don’t yet test the feature by dipping your device in water though. 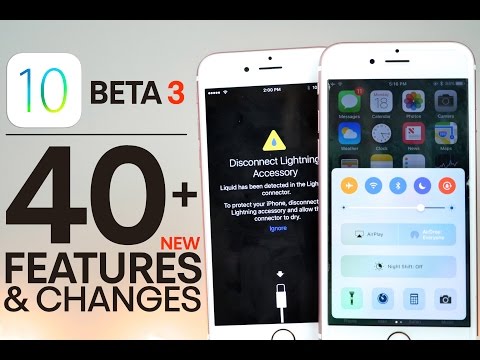 The notification only pops up in the most recent beta release of iOS 10. Additionally, it is only thought to work with the latest Apple handsets. So only those who are running iOS 10 beta 3 on their iPhone 6S, iPhone 6S Plus or iPhone SE may get the ‘moisture alert.’ And there are no guarantees since it’s not a final version of the OS.

You may also like: 7 Things Apple iOS 10 stole from Android

As for the rest of the changes introduced via the new software build by Apple, there are about 40 altogether. See the above video in full for the details.