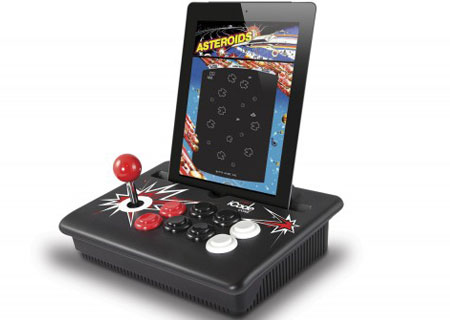 ‘A blast from the past’ is what most people are likely to tag the Ion iCade Core desktop game controller with, just by the looks of it. That being said, this gadget flaunts somewhat of an arcade-styled layout, whilst it is built specifically for the iPhone, iPad and iPod touch.

Announced back at the CES 2012, the controller is equipped with a full-sized joystick and 8 different arcade buttons that can be easily connected to an iPhone, iPod touch or the iPad over Bluetooth, for carrying out various commands. Once the iDevice is in place, users have to simply run any compatible app to get started. Besides providing a secure fit, it also houses a custom designed pass-thru slot that’s located just beneath the cradle for charging the Apple-branded gadgets.

“iCade Core retains the action-packed excitement of real arcade-style control from the original iCade, while being incredibly easy to take just about anywhere,” commented Fred Galpern, Brand Manager, Ion Audio. “iCade Core is just about the most fun you can have with an iPad, iPhone or iPod touch.”

The controller is said to be compatible with a number of popular classics including games like Pac Man, Asteroids, Centipede, and Battlezone. Besides these, the company also states that users will be able to run over 200 newer titles through its device. For the added gaming experience, the cradle can be adjusted to duly accommodate portrait and landscape modes as well.

Ion iCade Core release date and price details are still under wraps. However, the desktop game controller will be up for grabs through the company’s website and retailers sometime this year.