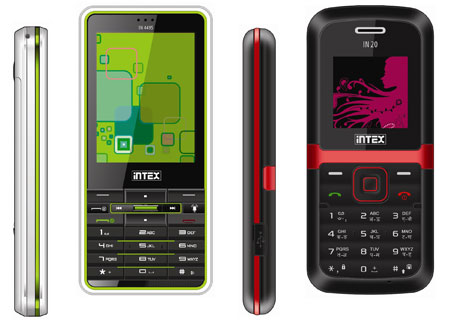 The IN 4495 features a 6.1 inch QVGA touch screen, camera and 3.5mm stereo jack. Motion Sensor technology has been incorporated into the device for user convenience. If the handset has been left behind accidentally, the Peer Control function enables owners to switch off the phone or operate it from a distance.

Other incorporated features include FM radio as well as a video and audio player. Additionally, the 4495 has Bluetooth, USB to PC connectivity, expandable memory of up to 8GB, mobile tracker and auto voice reply. It comes in color combinations of white and green as also black and plum. The device promises seven hours of talk time and ten days of standby time.

The exterior of the IN 4410 sports a 2 inch TFT display screen and VGA camera. The memory boasts of capacities amounting to 63MB. The phone also has Bluetooth connectivity, wireless FM, torch light and a video and audio player. It comes in an alluring shade of plain-vanilla.

The IN 80’s chassis displays a 6.1 inch QVGA screen, 3.8mm stereo jack and camera. It has Bluetooth and USB to PC connectivity, an audio and video player, FM radio and Motion Sensor intelligence. The handset offers data download speeds of 153.6Kbps, expandable memory of up to 2GB, 7 hours of talk time and 260 hours of standby time.

Lastly, the IN 20 is a basic CDMA phone that sports a 1.5 inch CSTN display. It also has FM radio, one-way call record mobile tracker and sound recorder. The handset promises 3 hours of talk time and 150 hours of standby time with the phonebook being capable of holding up to 500 contacts.