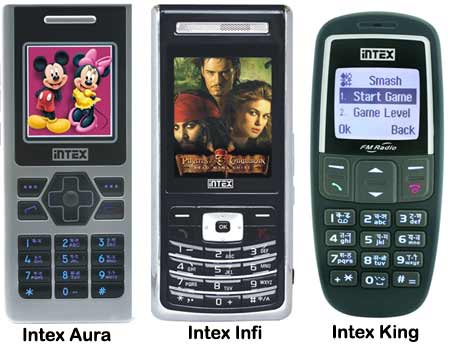 Intex Technologies has entered the handset market with the launch of three GSM mobile handsets- Aura, Infi and King.

According to the company, all three handsets are light-weight music phones with user-friendly features and sleek designs. Besides, they also carry ready access to popular Walt Disney content such as Pirates of the Caribbean and other popular Disney characters.

In fact, Intex has tied up with Buena Vista Internet group (a part of The Walt Disney Group), for preloaded Disney content.

The Intex Aura is a metallic mobile phone well equipped with a USB Web camera feature and a 1GB memory provided through a microSD card. This phone also has an MP3 player and a one-touch 1.3 mega pixel digital camera with 5 x 1 zoom facility.

The Intex Aura phone is 11.8 mm thick and weighs just 90 gms. Its 800 mAh battery provides a long battery life. Besides, this phone has an in-built photo editor ‘Photo Artist’ which is used to edit pictures. The Intex Aura phone also has an ‘AB Repeater’ to track and mix favorite audio sounds.

The Intex Aura handset is available in royal gold and shining black, and carries a price tag of Rs.8,000.

The Intex Infi phone available in a silver finish and weighing 68gms has a price from Rs.2000 to Rs.8000.

Again the price of the Intex King phone has not been specified, but we do know for sure that it lies somewhere in the price range of Rs.2,000 to Rs.8,000.