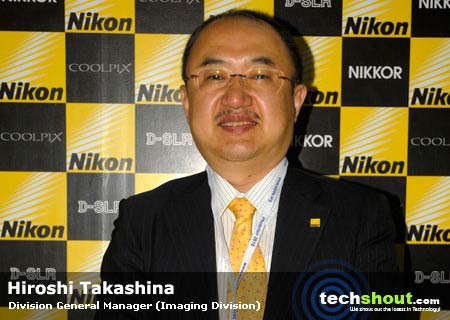 Nikon has penetrated the Indian markets with a number of interesting compact digital and DSLR camera offerings. Techshout (TS) interviewed Hiroshi Takashina (HT), General Manager of Imaging Division at Nikon at the recently held Photofair to gain an insight into Nikon products and their acceptance by the Indian market.

TS: As far as the Indian Market is concerned, how has the response been in 2009?

HT: 2009 was a very good year for us. First, let me start with the digital camera industry which has achieved more than 40% growth. In 2008, the total compact camera market in India was almost 1 million. In the fiscal year April to March 2009, we were sure to reach 1.5 million, an almost 50 per increase. As for the DSLR interchangeable lens segment, we expected more than 50% increase. Last year, the total market was worth 12,000 and this year we can expect more than 20,000, which is nearly double. It was a very good year for Nikon and its market share in the compact camera segment.

TS: Was it by far affected by recession?

HT: Actually, during the recession, in the period of November-December 2007, there was a growth drop in the market. But it hasn’t had such a huge effect since then. It could be because the Indian economy is still growing and has good fundamentals. There was probably a slight drop during November-December, 2007. After that there was no problem and we expect the same for 2010.

TS: Can you name few products which have done really well globally, particularly in India?

HT: Let me start with the DSLR, the professional segment. We have introduced one model, the D3000 which is very well accepted by Indian amateurs as well as professionals. So we could achieve more than double over the previous model. This model is also accepted in other markets like Japan and the US. Moving over to compact digital cameras, the S220 is the best selling model for us. It is a very slim model with a stylish overall design and comes in good colors. The D3000 is not only for professionals but also for amateurs, with a very useful guide which beginners can easily use without reading any manual. The Coolpix S220 is the most well accepted model in India. It also sold well in the US and Japan.

TS: Most competitors today prefer emerging products which suit the needs of fashion conscious users. Is Nikon planning to expand their line-up in this category

HT: Well, we have enough confidence in our designs. The most important point for us is the body and color. You see, we are the most colorful manufacturer, offering variations in color. We are always seeking personal points of view. Our directions and intentions are in keeping with the Indian customer’s mind.

TS: You currently have products ranging in the categories of cameras, scanners, lenses and Speedlights, do you’ll plan to introduce any new category of products in the near future?

HT: Our business started from optical lenses and we are the most experienced camera manufacturer. So, we will seek to implement more quality and high technology. We have the most experienced camera apertures. We don’t have stakes in other segments. We are not planning to launch other categories. We will mainly concentrate only on the imaging business.

TS: Over the years and just recently, Nikon is known to have supplied various products to NASA. Could you elaborate on it?

HT: We have experience and a long history with NASA. The camera that we sent to NASA is the exact same model that is available in India. We don’t make any changes over the modifications. There is confidence that even at such high technological fields our capabilities in any extreme condition are accepted by them.

HT: We plan to surprise the market. We will concentrate only on better quality and better line-up of cameras. So you can expect surprises.

TS: Last year, we were surprised with the projector camera S1000pj, can we expect something out-of-the box this year?

HT: We can’t comment right now. Let’s just say that it will be a surprise.

TS: Lastly, which is your favorite camera?

HT: It would have to be the D90. India is a very colorful place and my hobby is taking pictures of India. So, it’s the D90 which is my favorite.