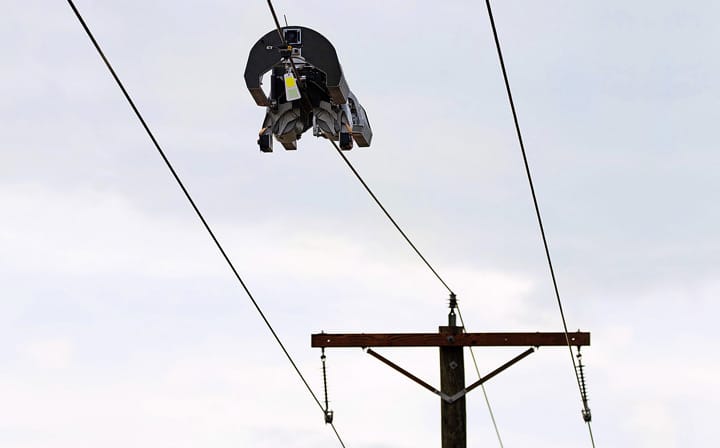 Facebook has developed an aerial fiber deployment solution that uses a robot to safely deploy a specialized fiber-optic cable on medium-voltage (MV) power lines that can dramatically lower the cost of deploying fiber by utilizing electrical infrastructure.

Each robot will be capable of installing over a kilometer of fiber and passing the dozens of intervening obstacles autonomously in approximately an hour and a half.

To account for the human interaction steps such as setup, loading and unloading the robot, installing transitions, etc., Facebook estimates an overall build speed of 1.5 km to 2 km per robot per day on average.

“We expect the total cost, including labor, depreciation, and materials, to be between $2 and $3 per meter in developing countries,” Facebook said in a statement on Monday.

The system, which utilizes the electrical grid to build out internet infrastructure, will be cheaper than the existing methods of laying internet cables, particularly in developing countries.

Developed by the team at Facebook Connectivity, the system combines innovations in the fields of robotics and fiber-optic cable design.

“If successful, we believe this technology will allow fiber to effectively and sustainably be deployed within a few hundred meters of much of the world’s population. We expect to see technology trials of this fiber deployment system next year,” Facebook said.

Facebook has identified NetEquity Networks as the first partner to deploy this new innovative technology.

From substations, power travels along MV lines into communities for distribution.

“We realized that following the same grid with fiber could be an efficient way to build an end-to-end telecommunications network. To utilize the electrical grid and lower the cost of fiber deployments, we therefore chose to focus on aerial fiber construction,” said Facebook.

The size and weight of the fiber cable are the most important factors in making helical wrap cost-effective in the MV space.

To enable compatibility with the thinnest power-line conductors, Facebook chose a minimum cable capacity per robot of a little more than 1 km.

A fiber network deployed following the electric grid has a big advantage.

“Through the use of suitably selected optical components, a wholesale lit service could be offered to serve all of these homes and businesses from a 24-strand fiber cable,” said Facebook.

Globally, more than 3.5 billion people are still not connected to the internet. With average data usage per person growing 20 to 30 percent annually, legacy bandwidth-limited technologies have been pushed to their capacity limits.

“While we still have a number of steps to complete before our first deployment, we have confidence that this approach will yield a substantial improvement to both the cost and speed of fiber deployments,” the company added.