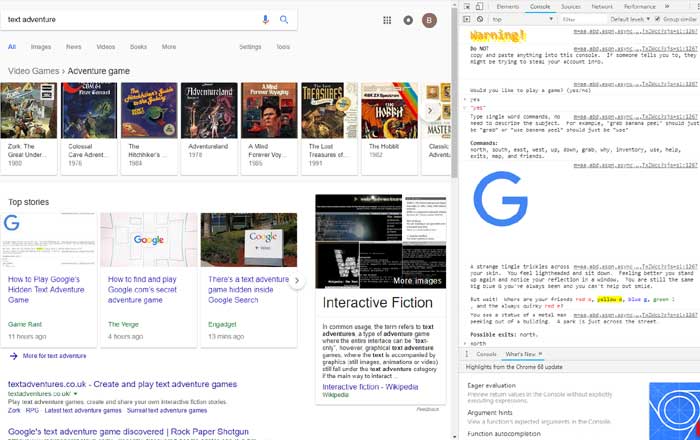 Get off Bingo Find or whatever other gaming site you’re on for a second, will you? It turns out that Google who is known for its clever easter eggs, has been hiding an online game under everyone’s noses. The company has snuck in a secret adventure game into its search engine.

The game went undiscovered until about 11 days ago when a Reddit user posted about the easter egg. The thread quickly went viral and started getting picked up by sites like RockPaperShotgun. Anyone can play the game, so long as they have a computer and a couple of hours to spare.

How To Play Google’s Secret Game

To get started, you’ll have to open up your browser. The game works on Google Chrome, Firefox, and Microsoft Edge, but not Apple’s Safari. Next, you’ll have to fire up Google’s search engine and look for “text adventure.”

You’ll instantly see a list of search results. Right click anywhere on this page and choose “Inspect.” You can alternatively press Ctrl + Shift + I for Windows or Cmd + Option + I for Macs. You’ll see a new menu pop up from the side. Tap on the “Console” tab and you’ll see a “Warning!” message and a question asking if you’d like to play a game.

You might see some Error warnings in red when you open Console. This is probably because you have your ad blocker switched on. Switch it off and the error will disappear. All you have to do at this point is type “yes.” The text adventure will automatically begin.

Text adventures are a very simple type of game where all the interactions are in the form of simple commands like yes, no, north, south, grab, and map. The game will progress as per the instructions you issue, so if you type north, your character will move north.

Google’s text adventure is pretty simple. You’re playing as the blue g in Google and on the hunt for the rest of your letter friends red o, yellow o, blue g, green l, and red e across Google’s California campus. The game is pretty fun and takes about an hour or so to complete.