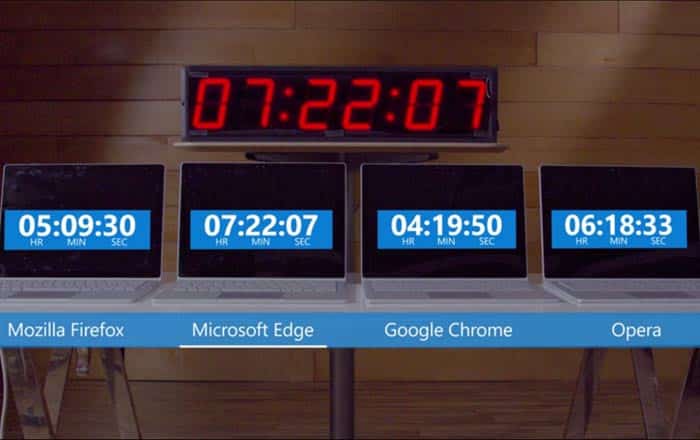 Google Chrome might be one of the most popular browsers out there, but the offering has always been notorious for consuming significant chunks of a laptop’s battery life. Microsoft has now taken up the task of showing just how much fuel it guzzles, all the while promoting its own Edge browser.

Microsoft conducted two tests on a Surface Book to evaluate the mettle of Chrome, Edge, Firefox and Opera. The first involved measuring power consumption for typical browsing activities such as opening sites, watching videos, and scrolling through pages in a controlled lab environment. The tech behemoth claims that it used the same websites people usually spend time on like Facebook and YouTube.

Edge apparently left its competition in the dust, offering up to 36% – 53% more battery life than the other browsers. The results of its other test are even more damning. Microsoft streamed HD videos wirelessly on each browser continuously till the laptop died. As can be seen in the video below, Edge managed to last for about 7 hours and Chrome for 4.

If accurate, this means that Edge lasted 3 hours longer than Chrome, a lifetime for video consumption. Lab tests aren’t the same as actual real-life data though, which is why Microsoft also dug into the stats of millions of Windows 10 devices around the globe. Again, Edge was able to beat Chrome and Firefox in these results as well.

Microsoft is very obviously trying to win people over into its camp. Edge is nowhere near as popular as Chrome and doesn’t offer a number of features available in the latter such as browser extensions. However, the company is looking to course-correct that through its Windows 10 Anniversary Update which is arriving this summer.