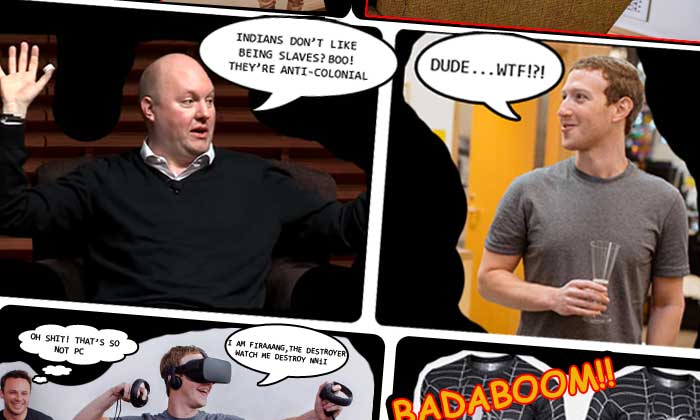 Some popular blogs have been talking about how Indians were offended by a tweet from Marc Andreessen, an investor and member of Facebook’s Board of Directors, which clearly suggested the country was better off under the British rule. But there’s a big difference between ‘taking offense’ and ‘begging to differ.’ The connotations are world’s apart. India was ‘reacting’ to Andreessen’s ignorant Twitter message, which was deleted after public backlash, and not ‘taking offense.’

Now Mark Zuckerberg has taken to Facebook to insist that neither he nor the company, support Andreessen’s view about India. He claims to find the comments ‘deeply upsetting’ and says the nation is important to him and the social network. No kidding, Zuckerberg. Facebook’s second largest user base in the world is from India. So maybe you could get Andreessen to fix his ignorance about the atrocities committed by the British Raj by watching Shashi Tharoor’s short and informative speech on the subject (video below).

We don’t expect Andreessen to feel any kind of crushing remorse for his rant on Twitter after one part of Facebook’s plan for taking over the Internet was halted. For starters, he deleted his insensitive comment and blithely tweeted ‘I apologize for any offense caused by my earlier tweet about Indian history and politics. I admire India and the Indian people enormously,’ followed by a smiley emoji. It took him a few more tweets to get it right.

How Andreessen ended up comparing Free Basics to colonialism

(Sub-titled) How to ruin your reputation in 140 characters

2. Companies like Facebook, Flipkart and Zomato wouldn’t exist if a rival with more money had paid a service provider or platform (such as Airtel Zero) to enable people to use their website or app for free.

3. Facebook’s Free Basics which violates net neutrality by offering select services for free, is illegal in India under the new TRAI ruling.

4. Being an investor and board member of Facebook, Andreessen obviously stands to lose from TRAI’s decision.

5. Also being ignorant of (or indifferent to) the consequences of 200 years of India under the British rule, Andreessen concluded that Indians must be anti-colonial since they don’t like being enslaved and looted.

6. Because India is anti-colonial, it does not want Free Basics, limited Internet access to those who can’t afford to pay for the whole deal. So he naturally tweeted his feelings about it.

Well done, Marc Andreessen. Perfect logic. Some have been saying folks who can pay for the Internet have decided that the underprivileged should not have access to the web, which is completely untrue. Facebook has invested tons of cash on a marketing blitzkrieg intended to garner India-wide support for its self-serving Free Basics platform.

It could have been better spent on investing additional money into its own Express Wi-Fi initiative that delivers connectivity to the whole of the web at a reduced cost to the end user. What do you think?