What seems like an incredibly well thought out tool has just been introduced by Facebook in order to help you better manage your social medial life after a breakup. If you have ended a relationship, you will be prompted to take advantage of these new features to control the posts your former partner will see.

Facebook tells us that this addition has been made by them at the request of several users. The tools have only been launched in the US for now as part of a test that will be evaluated before everyone on the social network gets to experience them.

You will get these options when you change your relationship status from ‘In a relationship’ to something else. One of the prime choices that you will be provided with will be to see less of a former partner’s name and profile picture on Facebook without having to unfriend or block them. 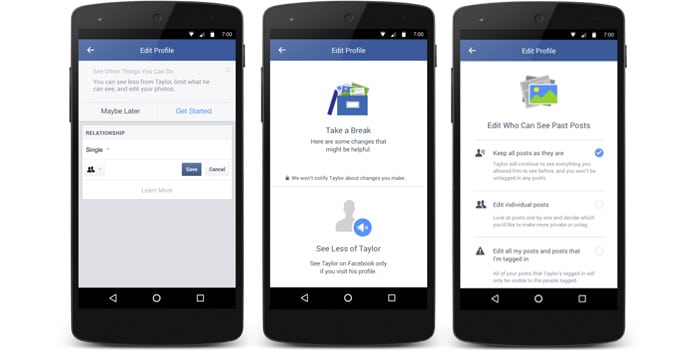 If you choose this, their posts will no longer appear in your News Feed, while their name won’t be suggested when writing new messages or tagging friends either. The new tool will also allow you to limit your photos, videos or status updates from popping up in your former partner’s feed.

Another cool feature is the ability to at once untag your pictures with that person. Or you can even edit who can see your past posts with the former partner. Recently, Facebook had introduced a similar trait to its much loved ‘On This Day’ section under which users can now filter out the dates and persons they don’t wish to be reminded about.

Also Read: Here’s why Snapchat makes you happier than Facebook

Like we said, the new relationship tools are only being tested in the US right now. They work on the mobile apps of Facebook.