While we’ve all been under the impression that Sony will take the wraps off its new 2014 portfolio at the MWC 2014, the company has surprised us by launching two new smartphones, the Xperia E1 and the T2 Ultra. Both handsets are entertainment-oriented and they offer optional dual SIM support.

The Xperia E1 is the successor the affordable Xperia E which was launched back in 2012. The handset is equipped with Sony’s latest audio technologies including a 100Db loudspeaker which can deliver clean and loud sound. According to the company, ‘even a motorcycle won’t interrupt your music.’ xLoud and ClearAudio + enhancements have also been thrown in along with a dedicated Walkman button and shake-to-shuffle controls. A 30-day pass for the Entertainment Network music streaming service has been provided as well. 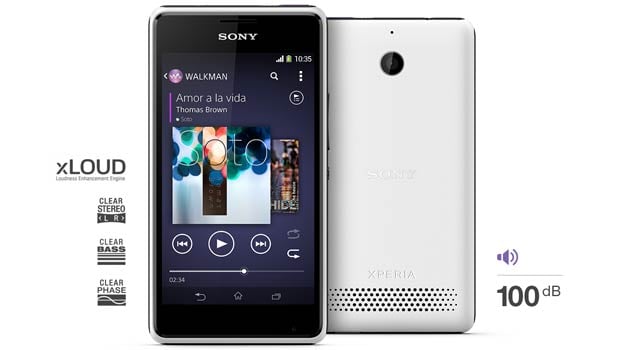 Where specifications are concerned, the Xperia E1 sports a 4-inch WVGA touchscreen, a 1.2GHz dual core processor, 512MB of RAM, 4GB of storage, HSPA+, a 3MP rear camera, Android 4.3 Jelly Bean and a 1700mAh battery amongst others. Next up is the Xperia T2 Ultra which is a 6-inch phablet that will compete against Nokia’s mid-range Lumia 1320 and Samsung’s Galaxy Note 3 Neo.

The Xperia T2 Ultra comes with various features seen on the Xperia Z and Z1. It runs on Android 4.3 and sports the same 13MP Exmor RS sensor. The display offers visuals in 720p HD resolution and the panel is of Triluminos type. Sony has also thrown in a quad core 1.4GHz processor, 1GB of RAM and a 3000mAh battery.

Here’s a quick overview of the phablet’s specifications:

Apart from unveiling the Xperia E1 and T2 Ultra, Sony hasn’t provided the slightest bit of detail regarding when we can expect to see both handsets hit stores and for how much.