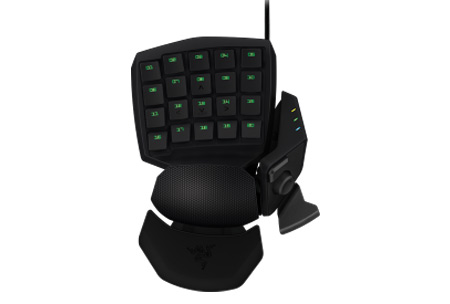 The price of the Razer Orbweaver mechanical gaming keypad has been announced by the San Diego-based company. Aimed at PC gamers, this product acts as a successor to the previous Nostromo keypad. Tournament-grade controls, ergonomics and full customization are some of the main highlights which Razer elaborates about. It is available for pre-order currently through Razerzone.com, and has its release date set for sometime in Q1 of this year.

The Orbweaver supposedly allows its users to assign an infinite number of controls to the programmable eight-way directional thumb-pad and 20 mechanical keys that are present on it. Moreover, only 50g of force is needed so as to trigger each key, claims its maker. The directional thumb-pad has two distinct uses. It can either be employed for movement or as a modifier for combinations. This whole setup thus allows players to instantly access a large number of spells, macros and abilities in their games.

As can be seen in the images, the device is not something that can be called ambidextrous as it fits into the left hand of its users, eliminating the need for the keyboard. For hours of comfortable play, it comes equipped with a set of adjustable hand, thumb and palm-rest modules. Furthermore, it even allows instantaneous switching between eight key maps and unlimited macro lengths. It is a backlit keypad, for easy usage in dark conditions. A limitless amount of gaming profiles can be stored for the device as well.

While its width has been set at 154mm, its length is 214mm and its depth, 55mm. The approximate weight of this gadget on the other hand, has been revealed as 300gms. The Razer Synapse 2.0 technology will be at hand for all those who use it. This feature lets gamers save their profiles to the cloud, so they can be accessed even when they’re not within the confines of their regular residing spots. A number of gaming accessories from the company now provide support for this trait. 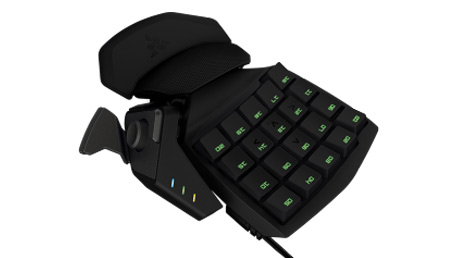 As mentioned above, the Razer Orbweaver mechanical gaming keypad will be launched worldwide sometime during the first quarter of this year. Its cost will be marked at $129.99.