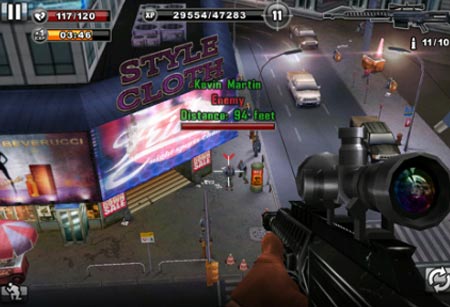 Adding to the series of numerous exciting action-packed titles on the iOS platform is this latest offering for trigger-happy gamers. Glu Mobile has proclaimed the launch of its latest game dubbed Contract Killer for iPhone, iPad and iPod touch users.

The title belongs to the FPS genre of games and comes equipped with gritty, 3D realistic visual graphics. Players will have to assume the role of a toughened assassin who is sent out on a series of lethal missions. It boasts of 17 intense story missions with sniper action, around 5 varied 3D locations, riveting gameplay and more.

“We are taking 3D Social Mobile games to the next level with rich settings and intense skill-based gameplay,” expressed Giancarlo Mori, Chief Creative Officer at Glu Mobile. “We believe 3D Social Mobile games should be of the highest quality and we will continue to produce compelling games with cutting edge graphics, gameplay and features.”

Users can choose from 20 diverse weapons including handguns, sniper rifles, tranquilizer guns, assault rifles and machine guns amongst others. In order to emerge victorious, players will have to take down deadly targets, pay off informants and earn cash rewards for buying equipment during the entire course.

The Contract Killer app can be downloaded via the iTunes App Store absolutely free of cost.