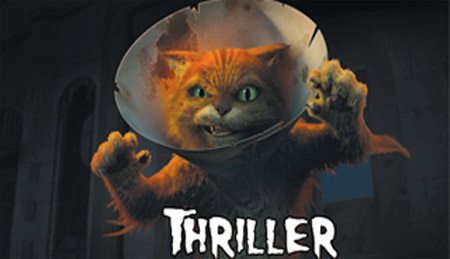 Whether it’s about getting stuck in a tricky maze or putting together some fast-food, this week’s Nintendo downloadable games wrap in Burger Time Deluxe, Anima: Ark of Sinners, Pyramids, Halloween: Trick or Treat and Academy: Checkers to fit it all in. Based on Michael Jackson’s classic video, this week’s Nintendo Video features DreamWorks Animation’s Thriller starring Shrek, Fiona and Donkey.

From bumping into friendly ghosts, witches, scary skulls and bats, Halloween: Trick or Treat for the DSi and 3DS takes characters Mike and Sally through an adventure in Pumpkin forest from which they have to escape. Featuring two variants and three difficulty modes, the classic board game Checkers, just made its way onto the DSi and 3DS under the title Academy: Checkers. The game also comprises of English Checkers and International Draughts variants, Achievements and more.

In a quest to create the ultimate hamburger, the Nintendo eShop has brought in Burger Time Deluxe, an arcade-style game which calls on users to lend Chef Peter Pepper a helping hand through different platforms by climbing a series of ladders in order to locate the ingredients required to plate up all the burgers. With just a gun, some TNT and a shovel, the main objective of the puzzle-based game Pyramids is to help the explorer escape from the pyramids by creating as well as destroying bricks. Hosting 54 3D levels that are divided into 6 worlds, users will have to avoid traps and monsters as they find their way out.

Up for grabs on Wii Ware, Anima: Ark of Sinners for the Nintendo Wii console takes place within a forgotten city within which the protagonist Celia journeys through 21 interconnected stages in an empty metropolis inhabited by shadows to figure out the city’s deepest secrets. With a variety of combat movements, multiple combos and special attacks, users will have to face 12 enemies and 4 different bosses.

For the Nintendo 3DS, Burger Time Deluxe holds a price tag of $2.99 on the Nintendo eShop followed by Pyramids priced at $3.99. Halloween: Trick or Treat comes for $7.99 on the 3DS or 800 DSi Points on the DSi. Nintendo downloadable games’ Academy: Checkers is available for $4.99 on the eShop or for 500 DSi Points.