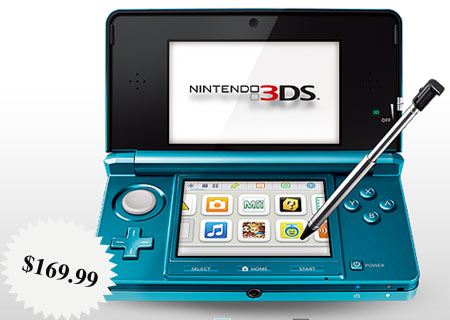 There’s good news for those who’ve been rather slow at reaching for the wallet and handing out $249.99 for the Nintendo 3DS since it’s going to sell for $169.99 starting from next month. This announcement has been encouraging a lot of speculation about the company caving in to the pressure of lower sales figures than expected due to increased competition in the casual gaming space.

It’s barely been half a year since the 3D capable portable gaming system was launched into the market. So the $80 drop may come as something of a surprise to most people. So far, the Nintendo 3DS has been treated to a variety of titles including The Legend of Zelda: Ocarina of Time 3D. And then there’s Star Fox 64 3D arriving on September 9, Super Mario 3D Land launching in November as well as Mario Kart 7 and Kid Icarus: Uprising scheduled for release before the holiday season is over.

“For anyone who was on the fence about buying a Nintendo 3DS, this is a huge motivation to buy now,” expressed Nintendo of America President Reggie Fils-Aime. “We are giving shoppers every incentive to pick up a Nintendo 3DS, from an amazing new price to a rapid-fire succession of great games.”

In an apparent attempt to placate those who bought the unit at the original price, owners are being 20 free games which can be downloaded from the Nintendo eShop before 11:59 p.m. Eastern time on August 11. These users will also be registered under the Nintendo 3DS Ambassador program which lets members download some games for free before they’re available to the general populace of gamers.

September 1 onwards, Nintendo 3DS Ambassador will be extended 10 NES Virtual Console titles like Super Mario Bros , Donkey Kong Jr., The Legend of Zelda and more at no charge. These will hit the eShop as paid games and once they do so, updated versions will also be proffered to Ambassadors for free. Towards the end of November, Nintendo will launch 10 Game Boy Advance Virtual Console titles just for Ambassadors.

The Nintendo 3DS is scheduled to be offered at the lower $169.99 tag beginning from August 12.