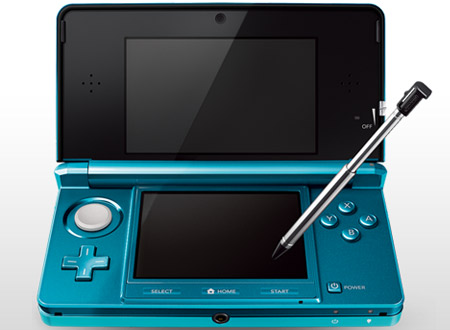 What is probably one of the most talked about gaming systems of the past year has finally reached the U.S. with a bang. The Nintendo 3DS is here for $249.99 and it arrived with no less than 18 games for company. By early June, Nintendo plans to have 30 titles out for this portable offering that boasts of rendering a 3D gaming experience without the need for special 3D glasses.

“Nintendo 3DS can play 3D video games and take 3D pictures, but that’s just the tip of the iceberg,” trilled Nintendo of America President Reggie Fils-Aime. “The 3D display is amazing in its own right, but just as compelling are the new forms of game play it delivers, and the groundbreaking ways it will connect players to new content … and each other.”

The Nintendo 3Ds can also play regular Nintendo DS titles with the original 2D graphics unless they call for the Game Boy Advance slot. The company has a series of features like a Nintendo eShop, a web browser, automatic and free access to AT&T Wi-Fi hotspots, Netflix streaming and the ability to access 3D Hollywood movie trailers in mind for this system.

The Nintendo 3DS is also out for Europe through various resellers including Amazon UK which sells it for £187.