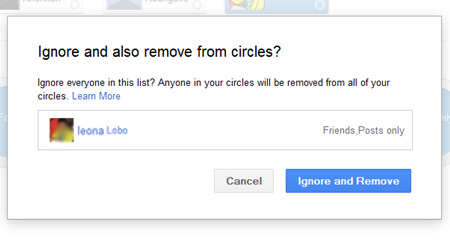 It may be a very fine line that we’re talking about, but the Google+ Ignore option is here to serve those who’d rather not block people from their social account. If blocking someone was indicative of not wanting to have anything to do with them at all, the ignoring function is meant to imply lack of interest in that particular person’s updates.

When one user Ignores another, the former party won’t be shown posts tied to the other in the incoming stream. Users will also stop getting notifications about the Ignored member’s activities and won’t see them on their Circles page. This function can be accessed from the Google+ bar, the Notifications stream or by just clicking Ignore next to a person’s name.

With the Block option, the person barred will not be able to comment on the concerned member’s content or see it at all unless it’s public. Content updates from the account being blocked will stop appearing in the user’s stream and the person attached to such an account will be removed from the other party’s circles.

On the other hand, people who’ve been Ignored will not surface as followers and users will not be able to see posts from such members in their incoming stream. Feeling a bout of regret after Ignoring someone and dropping them from circles? There’s a View Ignored drop down menu hanging from More actions for Un-ignoring them and adding them to circles again.

The Google+ Ignore option is currently being rolled out to users across the globe.