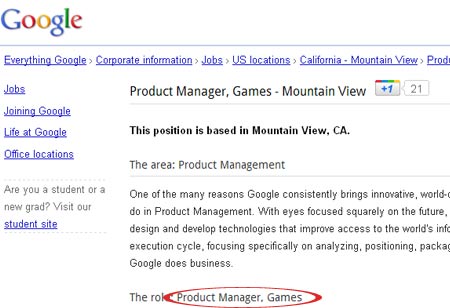 World domination requires the ambitious to have everything covered, of course. The reason why Games at Google sounds like a new term is because the company hasn’t dived deep into the gaming scenario until now.

A job posting from the Mountain View headquarters is inviting applications from anyone who thinks they can fill the shoes of product manager for Games at Google. That is, anyone with the qualifications listed down.

We’re not getting the specifics of what the Delaware corporation has in mind for the platform from the job listing which was spotted by Engadget. But since the sketched out role involves the words ‘social gaming’, it’s easy to draw some vague conclusion on this angle.

The fact that Google’s been interested in gaming is not the newest headline since the company apparently invested over a 100 million dollars in Zynga last year, as was reported by TechCrunch. The job posting back then read ‘Product Management Leader, Games’.

So when will we be treated to an official statement on Games at Google?