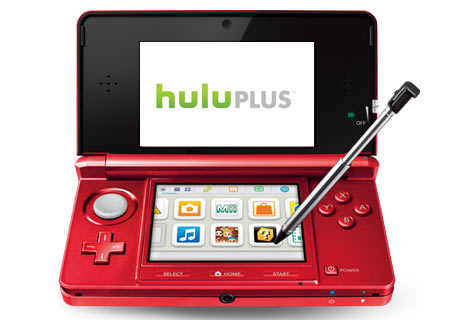 Apart from citing the arrival of the Hulu Plus service onto the Nintendo Wii and 3DS consoles, Nintendo has shared that the latter device is also expected to receive a software update through which users can record videos in 3D. What’s more, the company will even introduce a number of new games and 3D animated movies from DreamWorks Animation.

With the addition of the Hulu Plus service, users will not only have access to popular TV shows like Lost, Battlestar Galactica, The Hills, but also a large number of movies. Hosting premium channels including ABC, Comedy Central, FOX, NBC and MTV, all the latest seasons of shows like Modern Family, Glee, Dancing with the Stars, The Biggest Loser, House and Grey’s Anatomy can be viewed with a monthly subscription fee of $7.99.

Nintendo of America President Reggie Fils-Aime commented, “Nintendo 3DS continues to evolve with great new features and functions designed to reinforce its position as a premiere entertainment device. All of these features, in addition to great upcoming games like Pokémon Rumble Blast on Oct. 24, Super Mario 3D Land on Nov. 13 and Mario Kart 7 on Dec. 4, make Nintendo 3DS a smart gift option this holiday season.”

The Nintendo 3DS software update is stated to bring a number of new features and enhancements like the 3D video capturing capability from which users can record short movies of up to 10 minutes or even 3D stop-motion animation. What’s more, the StreetPass Mii Plaza is slated to get new puzzles. Besides these, the Nintendo eShop will receive more titles such as Dillon’s Rolling Western, Swapnote, Pushmo and Freakyforms.

The Hulu Plus service for the Wii and 3DS consoles is available at a monthly subscription price of $7.99. The software update for the Ninetndo 3DS is expected to roll out soon enough.