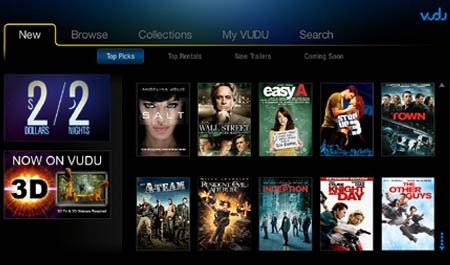 Back in November, Vudu revealed its venture with the PlayStation 3 for presenting gamers a superior movie-time experience. According to a post on the PlayStation blog, players can now stream 3D movies directly from Vudu on their PS3 systems.

This new functionality traces its route to the system via an update which unleashes the doors for 3D content on the platform. Those who have already installed the Vudu app need not worry about the arrival of the update as the system will automatically upscale it. Gamers who have not downloaded the app yet will have to install it first, before plunging into an immersive experience.

To make it interesting, the post states that the company will credit users’ Vudu accounts with a sum of $5.99. This will facilitate them to rent at least one HDX movie from PSN which currently houses eleven 3D-enabled movies with the inclusion of Chicken Little and Bolt. It is also expected to feature trailers of films such as Alice in Wonderland, Tron and others.

While replying back to several queries on the post, Vudu’s Head of Marketing, Caitlin Spaan offered some more insights about the service. It has been revealed that the company is streaming 5.1 Dolby Digital Surround to the PS3 while the minimum download speed required for acquiring 3D content in SD is 1.5mbps. Those who wish to download HD- and HDX-quality movies will need an Internet connection with at least 2.25 and 4.5mbps speeds, respectively.

PS3 owners who have been looking forward to taking a break from their racing and shooting action can now obtain a 3D movie from the PSN through their Vudu account.