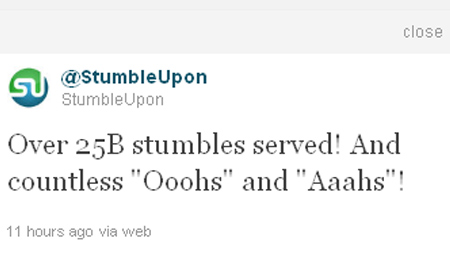 Those who’ve clicked the StumbleUpon Stumble button have contributed to it reaching 25 billion clicks, according to the latest bit of news on this social discovery tool. Founded in November 2001, the engine boasts of over 15 million users as well as 60,000 and more marketers employing it to promote various products and services.

Tracing a finger along the headlines which has been emerging from the startup’s quarters so far, an app for iPad made its way to iTunes just last month. Apparently, the app versions for iPhone and Android have enjoyed more than s1 million installs after being let out in August 2010. Then back in March, the StumbleUpon Paid Discovery social media brand advertising platform was announced for organizations wishing to grab customers through sponsored web and mobile pages.

“Today we celebrate 25,000,000,000 clicks of the Stumble! button,” tweeted Monica Semergiu, Community Manager at StumbleUpon, in the light of the Stumble button achieving this milestone.

March was also the month during which the company managed to raise $17 million in funding. This included financial investments from Accel Partners, August Capital, DAG Ventures, First Round Capital and Sherpalo Ventures. Since its initial Series A investment in April 2009, StumbleUpon claims to have more than tripled content recommendations to over 800 million a month.

It’s not hard to believe that the Stumble button touched 25 billion clicks considering that the service was touted to be handling 1 million Stumbles per month in April this year. We shouldn’t be surprised if the developers over at Facebook, Twitter and Google +1 start thinking they’ve got to watch their backs now.