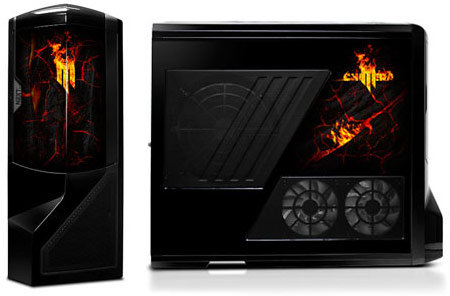 When flashy gaming equipment comes to mind, iBuyPower always seems to be just a thought away. The company is making an appearance at the CES 2011 with the Chimera XLC gaming system. It has been advertised as the first iBuyPower offering that features the company’s XLC package.

When a hint is taken from the name, a vague picture of an exterior with a fiery theme ought to shape up. Staying true to the badge, this gaming system is mostly black with patterns resembling flames imprinted on the upper regions. It is enveloped in the NZXT Phantom gaming case and can proffer around 24GB of memory.

“The Chimera has been one of our most successful product lines to date, and has quickly become iBUYPOWER’s signature system,” trilled Darren Su, Executive Vice President of iBuyPower. “We felt offering an XLC version of the Chimera was the next logical step in the evolution of our flagship line.”

The pricing for the Chimera XLC will read upwards from $1,099 whenever it’s made available in the current month.