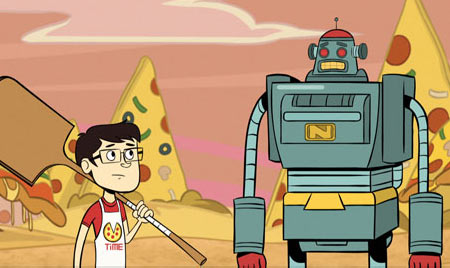 Nintendo has been drawing up their timely list of downloadable games as usual and the titles up for grabs this week include Mario’s Picross, Monochrome Racing, Play & Learn Spanish, B Team, Go Fetch! 2 and Pizza Quest. The last mentioned from CollegeHumor is part of Nintendo Video offerings and follows Scott on a quest for the best ever pizza ingredients.

Mario’s Picross is a puzzler which gets gamers to decipher numbers and uncover hidden images in order to help Mario unlock the mystery of Picross. There are more than 250 brain-wringing puzzles to solve in this $3.99 game for the 3DS. Monochrome Racing for WiiWare lets racing fans get behind the wheel on over 80 tracks while having as much fun as they can burning rubber and trying to gain color in a world of black and white.

Multiple weapons, upgradeable equipment, tough bosses and destructible environments are all bundled into the package in B Team – Episode 2: Ice & Venom, which is an action-packed squad-based shooter. In this game, players take control of a small private army whose soldiers were hired from all over the world. The aim is to lead the platoon through a blitz of commandos, voodoo warriors, Eskimo hunters and more.

Apparently Go Fetch! was popular enough to warrant a sequel. Arriving with improved graphics, enhanced controls and a new battle mode, the fresh title asks players to guide their puppy to retrieve balls tossed around while skirting obstacles and gathering items to complete missions and advance further. Feel an itch to polish those Spanish-speaking skills or learn a new language over the weekend? Play & Learn Spanish is probably an entertaining option.