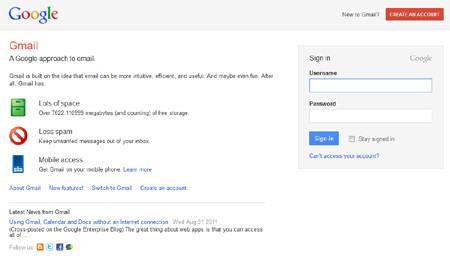 We’ve gotten so used to the plain old Gmail sign in page, the new one came as quite a surprise, even if the overhaul may not be as glaringly noticeable as YouTube’s Cosmic Panda experimental design. Now whenever users attempt to access the e-mail service, a little yellow box surfaces at the bottom of the screen, asking them to see the spanking Gmail login page that’s soon to arrive.

On the new page, the invitation to ‘Create an account’ is a red button placed above the sign in box that’s taken on a gray color now. And most modest of the all is the Gmail logo which drops the envelope from the letter ‘M’ entirely and shows up in simple red text. Additionally, the old instruction to sign in with the concerned Google account has been replaced with a straightforward ‘Sign in’.

The ‘Preview’ and ‘Preview (Dense)’ themes which were announced back in June seem to get along quite beautifully with the freshly revamped Gmail sign in page. The themes’ unveiling was described as part of a ‘Google-wide effort’ for a unified look across products. This happened around the time the Google homepage was on the receiving end of a minimalistic appearance.

Google hasn’t come clean on when the new Gmail sign in page will actually roll out irrevocably for users. But it will stick around to be sure, considering that the FAQs section accessible through the ‘Learn more’ tab in the yellow box says ‘eventually this change will be permanent and you will not be able to switch to the old look’.