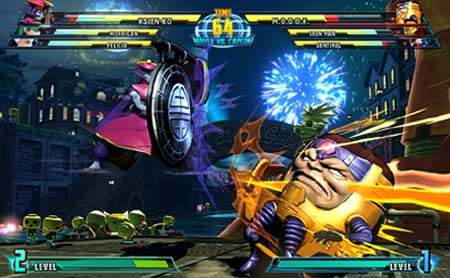 Unfolding a new chapter in its celebrated fighting franchise, Capcom unleashed Marvel vs. Capcom 3: Fate of Two Worlds earlier this year. While the domain has been buzzing about the title and its characters, the gaming giant is beaming with joy thanks to the surging shipment figures. According to the company, it has shipped two million copies of the latest Marvel vs. Capcom installment.

Following a hiatus of 11 years, this game in the series was dished out in February this year amidst much hype. The publisher also emphasized that thanks to the revival of the fighting genre in recent times, the title has received an affirmative response across the globe. Surpassing the benchmark set by its predecessor, Marvel vs. Capcom 3 has successfully shipped two million units.

With over 30 dynamic characters from the universe of Marvel comics and Capcom’s gaming library, this title allows players to jump into the battlefield with two assist friends for a blistering combat experience. It also portrays vividly crafted backgrounds against lucid animations as gamers compete their way through numerous contests.

Marvel vs. Capcom 3 is now out in stores for the PS3 and Xbox 360, stretching out a battleground between legendary fighters.