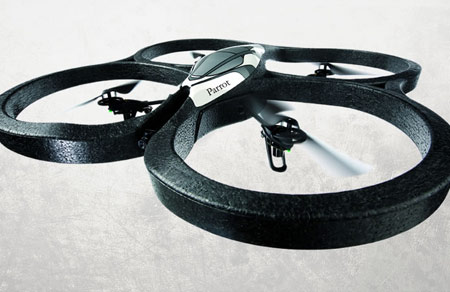 Augmented reality has probably never looked this sweet to gaming buffs. Those whose fingers that have been tingling to fly the AR.Drone quadricopter since its award-winning debut at the CES 2010 will be interested in this news. The Parrot AR.Drone quadricopter that uses AR and is piloted by the iPhone/iPod touch/iPad will be shipping through Brookstone this September.

The AR.Drone is a quadricopter that blends the real and virtual worlds to deliver a novel gaming experience. It can be flown in indoor as well as outdoor settings and creates its very own Wi-Fi network that can be connected to the Apple device. Gamers can steer the toy via the control button and the accelerometer built into the iPhone/iPad/iPod touch.

“The Parrot AR.Drone offers an entirely new flight and gaming experience,” remarked Ron Boire, Brookstone CEO. “It’s the first flying vehicle you can control with your iPod, iPhone or iPad. Brookstone is proud to be the first store in the U.S. where customers can purchase the AR.Drone. We’re going to make a lot of pilots very happy throughout the fall and holiday season.”

The quadricopter integrates MEMS, two gyrometers, three axes accelerometer, one ultrasound sensor and one vertical camera to automatically stabilize when it’s in flight. Its front camera broadcasts and streams visuals to the Apple device while users play AR games. It is bundled in with an external hull, a battery, a battery charger and 4-pin mains adapter, a set of stickers and a quick start guide.

A $299 price tag has been slapped onto the Parrot AR.Drone. Brookstone will start shipping the device starting from September 3 this year, while it will hit Brookstone outlets on October 31. The AR.FlyingAce game will be made available for download in the App Store.