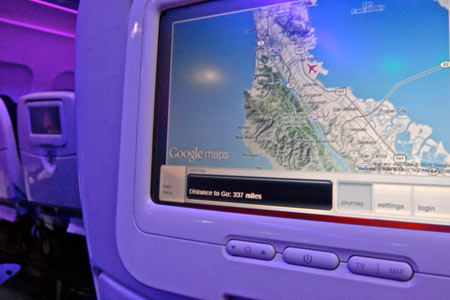 Those who’ve fallen for Google’s ‘Where Am I?’ gag may have found themselves in Mordor or the lost city of Atlantis on April Fool’s Day. The official Google Lat Long blog has now announced a Google Maps update that gives Virgin America passengers an idea of their exact location while flying.

The collaboration with Virgin America has resulted in updated Google Maps data on the touchscreens of each airplane seat. Passengers can now avail of a striking terrain view and new Google data. Mountains, elevated areas and similar natural features have been highlighted in these maps. Users can zoom in or pan to explore the terrain being covered with this development.

It’s like taking a cloud-penetrating look at the ground from 35,000 feet up in the air, according to Google. There’s probably no need to be wary of this addition that might seem very like the ‘Where Am I?’ feature which may have convinced people that Google does have a funny bone in case the goat grazing episode failed to amuse them.