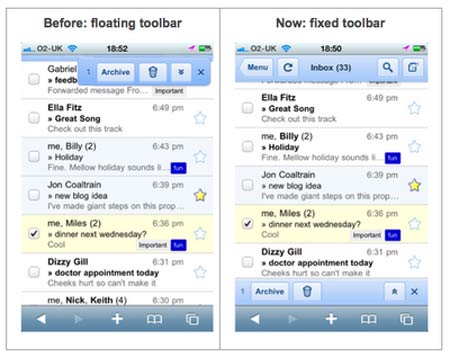 It is not only Apple who is constantly on the brink to devise various ways for pleasing iPhone users. According to a post on the Google Mobile blog, the Internet giant has engineered two new enhancements to facilitate simple web browsing for Gmail in Safari.

As iPhone owners browse the Internet on their prized possession, they can now scroll through content at a swifter scrolling pace in the Safari browser. Reflecting the speed of users’ swipe gesture, the augmented velocity will allow them to indulge in long conversations with few quick flicks. With this, users can access information at a faster speed to derive more out of their web experience.

The company has also fastened the toolbars on the screen even while users scroll to read comments or a news article. Previously, the toolbars would move down into view as users scrolled through the content. This new improvement makes it possible for users to quickly employ the toolbars even while they key in text for an email or plunge into the world of an app.

It has been further disclosed in the blog that based on the feedback received from users, the company has developed the new design and other upgrades for Gmail. In recent times, it has refurbished the on-screen Gmail buttons on a number of occasions. In addition, users can offer feedback for enabling Google to dish out a refined experience.

These improvements are now available for iPhone and iPod devices running on the iOS4 software. Users who like the revamped Gmail in mobile Safari can include it into the ‘Add to Home Screen’ option by tapping the plus sign at the foot of the display.