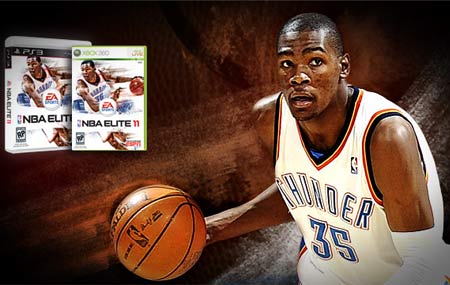 Basketball fever has already hit the gaming scene long before the actual release of the sports title. Early June revealed that NBA Elite 11 would unfurl into the gaming terrain this fall complete with a new control scheme and real-time physics. To further entice fans, EA Sports reveals that it has roped in Oklahoma City Thunder small forward Kevin Durant as cover athlete for NBA Elite 11.

The 2010 NBA All-Star athlete Durant is looked upon as the youngest player to head the score count in the recent season. He is also claimed to have led the Thunder to a 50 win season as well as a NBA Playoffs berth. Kevin Durant has loads of accomplishments and accolades to boast of in his short professional career.

“I’ve always been a fan of EA Sports. This has been an exciting year for me and the team, and capping it off with being on the cover of NBA ELITE 11 is cool,” revealed Kevin Durant.

As the company suggests, Durant is picked second overall in the 2007 NBS Entry Draft. He will also represent USA at the 2010 FIBA World Championships. This event is expected to take place this summer in Turkey. He is reportedly the third player to adorn the pack of both an NCAA and NBA licensed product.

“Durant is a game changer,” revealed Jordan Edelstein, VP Marketing, EA Sports. “There has never been a player his size with his skill set, and there has never before been a basketball videogame like NBA Elite. Just like we see Durant as the future of the NBA, NBA Elite 11 represents the future of basketball videogames by providing a gameplay experience you simply won’t find anywhere else on the market.”

NBA Elite 11 provides fans of basketball Hands-On Control for one-to-one responsiveness exactly corresponding to the player’s actions. As revealed by the company, this control scheme is seen as a first in the video game series. Thanks to the hands-on control feature, gamers can execute offensive and defensive moves like fadeaways, dunks, blocks, drives to the basket, steals, dribble moves and mid-air adjustments.

NBA Elite 11 is under development with the game expected to release into stores by October 2010. The company hasn’t yet disclosed the official pricing and exact release dates of the title.