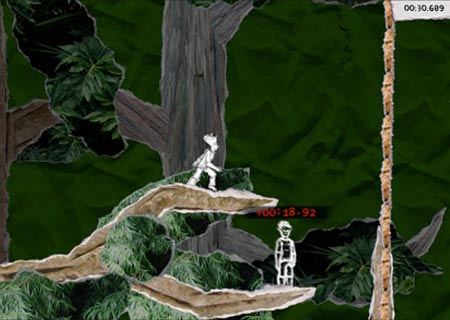 This week, Wii owners can derive more out of weekly downloads with a bundle of fun and interactive content. WiiWare channel brings home to gamers Snowpack Park along with demo versions of ‘And Yet It Moves’, ‘Bit.Trip Fate’, ‘Jett Rocket’ and ‘ThruSpace’. In addition, the Virtual Console dishes out side-scrolling action in ‘Spin Master’.

Snowpack Park puts gamers into boots of a penguin rescuer as they don the role of either a Mii or an integrated character from the title. On their quest, they will have to sail across numerous islands for saving these creatures and bringing them into the park. Once all penguins are back to the square, players can deal with their mood swings and increase interaction by feeding and playing with these pets. Besides, the game is inundated with fun minigames, headwear pieces, edible fishes for penguins and more.

Unleashing an action-based saga on the Wii, Spin Master sets out Johnny for an exciting escapade. As gamers transform into the role of the adventurer, they will need to retrieve a piece of a treasure map as well as their girlfriend from the clutches of Dr. De Playne. With over five stages, this VC title facilitates players to map together their route towards a big surprise. In the game, they can jump, hop and launch assaults with spirit chargers, sliding as well as super bomb attacks to ascend further.

Coming back to WiiWare, it unlocks a window into four new games such as ThruSpace, And Yet It Moves, Jett Rocket and Bit.Trip Fate. The demos for these titles offer a comprehensive view, enabling players to determine a pick of their choice. In Jett Rocket, they can traverse to the planet of Yoroppa for unraveling the reason behind the evil Power Plant Posse ambush. Bit.Trip Fate is yet another tale in the series portraying shoot ‘em up action with CommanderVideo.

The demo for physics-based platform game namely And Yet It Moves requires players to move across a paper world. Gamers can survive 20 tough levels by solving mind-bending puzzles to unlock bonus levels, indulge in competitive play modes and witness amazing alterations within the title’s ambit. Lastly, ThruSpace has been plugged as a thrilling puzzle game where gamers will need to rationalize their moves for getting a keydron through several gaps.

Those who wish to play alongside Penguins can grab Snowpack Park from the WiiWare channel for 800 Wii Points. Spin Master is available on the Virtual Console at the price of 900 Wii Points. The demos can be downloaded without paying any additional charge while the full version of Jett Rocket as well as And Yet It Moves will need gamers to redeem 1,000 Wii Points per title. Bit.Trip Fate and ThruSpace full version games have been tagged with a label of 800 Wii Points each.