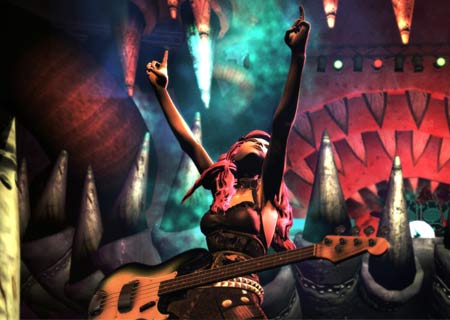 As the month of February slowly draws to a close, MTV Games along with Harmonix want to end this month with a bang. The companies reveal a three pack of songs from HIM as well as endow onto fans of the franchise singles from The Police, Marilyn Manson, KSM and One Night Only.

The current inclusions are added to the already 400 artists that can be found on the acclaimed Rock Band platform. We see Helsinki-formed rockers namely HIM making their Rock Band debut with a three pack of songs. These include ‘Ode to Solitude’ and ‘Heartkiller’ plucked from their very latest studio album dubbed Screamworks: Love in Theory and Practice, Chapters 1–13. The pack also comprises of ‘Wings of a Butterfly’ taken from their 2005 album Dark Light. Out of the three, ‘Heartkiller’ can be also found in the Lego Rock Band Music Store.

Each track is priced at £.99 or 160 Microsoft Points for Xbox 360 while the ‘HIM Pack 01’ can be purchased for £2.49 or 440 Microsoft Points. For Wii owners, each track can be acquired for $2 or 200 Wii Points. All these songs have already hit the Xbox 360 and Wii while PS3 owners can groove to these tracks tomorrow.