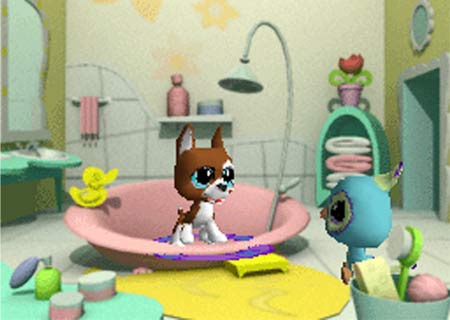 Spending quality time with family just got a whole lot more fun. EA Play brings forth a handful of offerings that is expected to get all the family members in on the act. The company unveils new DSiWare games in the form of Foto Face: The Face Stealer Strikes, MySims Camera and Littlest Pet Shop.

In Foto Face: The Face Stealer Strikes, players can be part of all the gaming action, literally. The title sees gamers traverse on a wild adventure in search for their identity. There are 15 action-packed levels packed into the game complete with special features that exploit all the unique capabilities of the DSi gaming console. Players take the form of the in-game character by utilizing the camera and microphone to capture their picture as well as voice. Besides players, friends, family members and even pets can be part of Foto Face: The Face Stealer Strikes via the DSi camera.

MySims Camera is noted to be a camera application which features famous MySims characters. Gamers can capture pictures and then overlay 3D MySims characters for a realistic appearance by rotating, animating and scaling them as desired. To further add dazzle, gamers can doodle on the photos with the help of the stylus and the stamp tool. The final creations can then be fitted in a snazzy frame and added to the Nintendo DSi photo album.

All the little adorable critters of Littlest Pet Shop can be espied on the Nintendo DSi gaming system. Owners of the portable console can play catch with their pets as well as adorn them with cute new accessories. They can keep their pets happy and content by brushing their fur and feeding them yummy treats. With this game, players can even throw a party for their pets and watch them groove to different tunes.