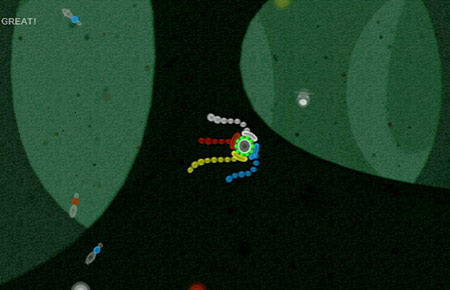 The heavy downpour taking place in our part of the world also seems to be reflected in this week’s Nintendo downloads. The company brings to us not drops of rain but exciting Wii and DSi titles. For the WiiWare this week, we see the terrain packed with two games in The Tales of Bearsworth Manor namely Chaotic Conflicts and Puzzling Pages as well as Art Style: Rotozoa.

The single player Art Style: Rotozoa enables gamers to take full control of a round organism dubbed rotozoan in order to guide it through the tricky levels filled with primordial ooze. There are just three main parts of the creature namely tentacles, life force and colored sides with its primary aim to sprout either long tentacles or just to a particular extent. As gamers traverse through the title, they will be bombarded with additional modes as well as the chance to decide on the number of tentacles their rotozoan will possess. The tentacles are used to absorb the enemy goobugs of the same color. If they meet with one bearing the wrong hue, the tentacle gets damaged and the life force in turn decreases.

In Art Style: Rotozoa, the longer the tentacle stretches, the harder it becomes to keep away from the ever-populating goobugs. However aiding them in their endeavor are objects like special attack-enabling cyclone item or the restorative heart item. These helpful offerings can be found floating across the gooey ooze. Players can indulge in various levels ranging from peaceful to intensely challenging. Like the other titles in the Art Style series, this iteration too is packed with elegant design, intuitive controls and stunning graphics.

Published by Square Enix, The Tales of Bearsworth Manor: Chaotic Conflicts lets gamers dive into a scary tale equipped with only Wii Remotes and their bravery. In a crumbling mansion there is a queer picture book. By employing just the Wii controller, players must throw animated paper bears into its pages. The sparkling blue jewels has to be kept away from a young boy named Kina who lives in the creepy mansion. To make their mission successful, they must use all the tools available to them. The game is filled with thirty challenging stages.

The Tales of Bearsworth Manor: Puzzling Pages also comprises of thirty stages and is published by Square Enix. Here, gamers are called upon to solve innovative puzzles as well as hurl animated paper bears using just the Wii Remote controller. They have to place the bears at strategic positions as well as change the unique surrounding environments while collecting all the red candies. Gamers will be able to see the drama revolving around a young girl called Pina in this captivating puzzling installment.

The Tales of Bearsworth Manor titles can be acquired for 1,000 Wii Points each. Art Style: Rotozoa sports a price tag of 600 Wii Points.