TechShout
Home Internet Legendary Wars: T-Rex Rumble and others stumble onto the DSiWare 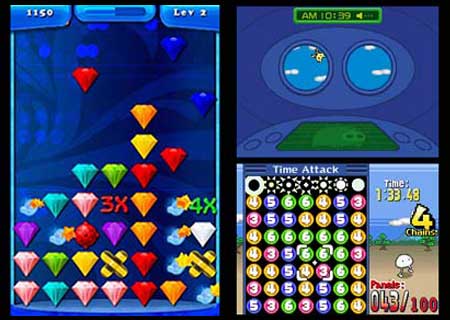 A little while earlier, Wii owners got a taste of just what to expect this week from Nintendo. Their platter comprised of titles such as Art Style: Rotozoa and a couple of The Tales of Bearsworth Manor games. Coming to the DSiWare offerings, the company bursts forth with Spin Six, Puffins: Let’s Fish!, Mega Words, Super Swap and Legendary Wars: T-Rex Rumble.

In Spin Six, players must alter and place all the numbered panels in order to form a single line until they disappear. They have to create uninterrupted chains of panels and merge them together for the reward of a high score. There is also a Puzzle mode which includes around 200 puzzles in two various types of categories, One-Turn or Chain. The Time Attack mode lets players remove the set number of panels in the fastest time possible. The game also comprises of Score Attack mode and Chain Challenge mode.

Published by Other Ocean Interactive, Puffins: Let’s Fish! lets gamers have a tasty fish treat this week. They must scout the vast ocean in search of the puffin’s favorite capelin. But watchout! Along the way there are dangerous enemies who are out to hurt the birds. These threats include jellyfish, sharks and other predators. There are two exciting modes that can be availed of which is seen strewn across 18 underwater stages.

Mega Words is published by Digital Leisure and comprises of many puzzles spread across three titles dubbed as Hangman, Anagram Hunt and Word Scrambler. There are extensive dictionaries embedded into these engaging portable editions which are expected to attract both novices as well as experts. Mega Words is set to stretch the mind as well as sharpen their vocabulary as players unscramble words through engaging puzzles.

Super Swap is a mixture of many fun elements such as arcade action and matching fun pulled together to offer gamers a new title which will keep them engaged for hours on end. The board must be cleared by simply connecting three or more colorful blocks together. Players can do so by dragging them in any direction they desire. They should however speed up as the continuous barrage of blocks will keep on falling at a faster pace as the game evolves. They can also take advantage of combos and special power-ups to attain points in various game modes.

Legendary Wars: T-Rex Rumble focuses on a small tribe of humans who are seen on the brink of extinction. In order to survive against enemies and get a constant food supply, they need a good leader. This person comes in the form of the player who must command over 20 men as they defend their village and acquire food. They will engage in real-time battles with dangerous dinosaurs as well as gather food and subsequently increase in number. The powerful magic of the Shaman can be used against their foes as well as heal their men. With a flick of the DSi stylus, gamers can easily assemble the warriors and assign different duties to them.