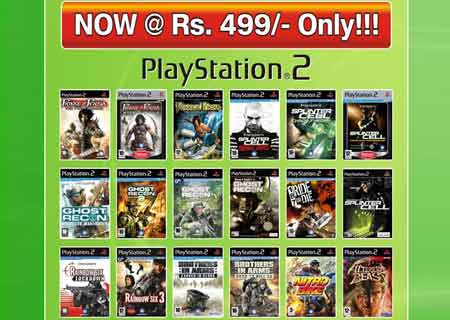 Amidst all the heat scorching up the month of May, we see e-xpress Interactive cooling down gamers by dishing out a complete treat in the form of 30 engaging titles. The game software distributor will release PS2 console games from Sega and Ubisoft. What’s more is that these titles will be priced at just Rs.499 each.

PS2 owners are spoiled for choice as they are offered not just one or two but 30 games spanning across different genres. These titles include many enticing gaming series such as Splinter Cell, Sonic, RainbowSix and Ghost Recon. There are even three Prince of Persia games namely The Two Thrones, Warrior Within and Sands of Time. Brothers In Arms, Nitro Bike, Altered Beast, Headhunter Redemption, Hulk, Ironman, Yakuza and Monkey Ball among others can also be enjoyed at a reduced price.

All these games can be individually purchased for a price of Rs.499. The titles are expected to hit stores by this month.