TechShout
Home Internet Sid Meier’s Pirates! washes up onto the Wii this autumn 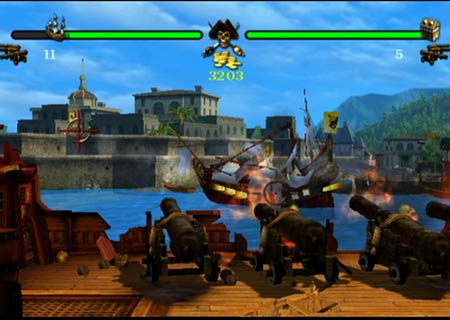 Players situated all across the globe can soon prepare themselves to adorn their eye-patch and train a parrot onto their shoulder. As 2K Games now reveals, Wii owners will be treated to the much-awaited swashbuckling title Sid Meier’s Pirates! by fall this year.

The high seas adventure enables gamers to take on the role of captain as they engage in dangerous pirate ship battles and raid the 17th century Caribbean. During the course of gameplay, they will have to face against opponents, challenging them with clanging sword fights. Players even have to win over fair maidens as their goal is to rescue their family from the clutches of the evil Marquis de la Montalban.

“We are big fans of the Wii and think Pirates! is the perfect game to bring to that platform. We’re sure Wii fans will enjoy the timeless adventure of being a pirate captain on the high seas as much as all of our other fans have!” exclaimed Sid Meier, director of creative development at Firaxis Games, and designer of the Sid Meier’s Pirates! series.

Gamers can opt from any one of the 27 fully customizable ships as they dock on strange ports for assembling a crew of bandits. In Sid Meier’s Pirates!, gamers can undertake daring missions, acquire secret treasure maps and dish out justice to local braggarts, pirate style.

The upcoming game features traditional mini-games plucked from the classic original like Ship Combat, Dancing and Sword Fighting. There are also two mini-games exclusively fashioned for the Wii version of the title namely Lock Picking and Bombardment. Owners of the Nintendo console can also enjoy special ship and character customization options.

Sid Meier’s Pirates! bears an E10+ rating by ESRB and is expected to sail onto the gaming terrain by autumn this year. The exact release dates and pricing is however still under wraps.