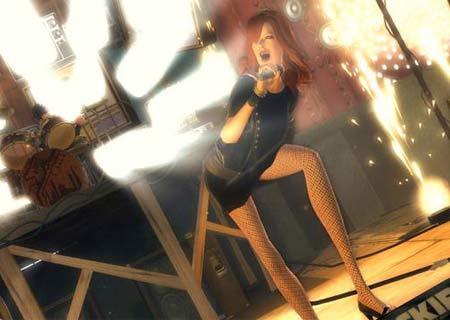 Guitar Hero has captured the hearts and minds of fans and gamers alike throughout the years. The music library is packed with loads of various artists and bands making their way through the franchise by endowing some of their best hits in different genres. Guitar Hero kick starts the year 2010 by including Creedence Clearwater Revival and Vampire Weekend into the January line-up. Also espied are forthcoming blues artists Scott McKeon, Joe Bonamassa and Tyler Bryant along with metal bands like Amon Amarth, Dethklok, Shadows Fall.

The New Blues Masters Track Pack includes boasts of ‘Who I am’ by Tyler Bryant, ‘Broken Man’ by Scott McKeon and ‘Lonesome Road Blues’ by Joe Bonamassa. The franchise sees the likes of Vampire Weekend returning with their three-song track pack which features ‘Holiday’ and ‘Cousins’ plucked from their latest album Contra as well as ‘The Kids Don’t Stand a Chance’ from their 2008 self-titled debut album Vampire Weekend.

There is something for metal fans as well in the January array of songs. Shadows Fall brings along with them ‘Still I Rise’ from their sixth studio album, Retribution, Amon Amarth comes in with ‘Twilight of the Thunder God’ from their seventh studio album titled Twilight of the Thunder God. ‘Laser Canon Deth Sentence’ by Dethklok is taken from their second full-length album, Dethalbum II. A three song track pack by Creedence Clearwater Revival also graces the Rock Band franchise this month. The band belts out tracks like ‘Proud Mary’, ‘Bad Moon Rising’ and ‘Travelin’ Band’ from the albums Bayou Country, Green River and Cosmo’s Factory respectively.

The Vampire Weekend collection of songs can be acquired from January 14, 2010. Metal fans can get their hands on this genre of songs starting from January 21, 2010. Creedence Clearwater Revival can be espied only after January 28 at Rock Band. The New Blues Masters Track Pack for the Xbox 360 and Wii are already up for grabs while PS3 owners need to wait until January 21, 2010 to get groove to their music.

The above mentioned track packs are available from the Xbox Live and PlayStation Store for 440 Microsoft Points and $5.49 respectively. Wii owners can acquire these packs for 550 Wii Points. Single songs from these bands are priced at 160 Microsoft Points, $1.99 and 200 Wii Points.