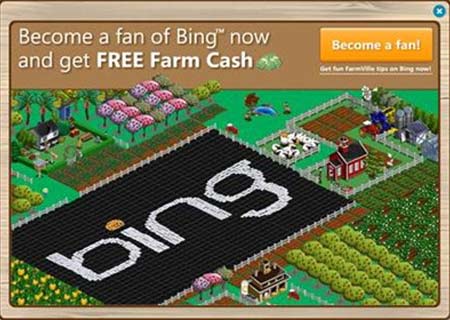 It’s a case of companies shelling out money to reach more patrons – only this time it’s Microsoft Bing paying out virtual cash to those who join their Facebook community and Farmville buffs are certainly not complaining. Bing, in partnership with Zynga, has been inviting Farmville members to join the Bing Facebook community in exchange for farm dollars.

According to the official Bing community blogspot, the promotion invited Farmville players to become fans of Bing on Facebook and also requested them to spread the word among friends. Fans who joined the Bing community through this advertisement were given farm dollars or virtual currency that is required to purchase items in order to build and sustain a farm on the popular Facebook game.

The new advertisement is aimed towards getting more people to engage with Bing and its services. The promotion that was up on the SNS for 24 hours saw 4,00,000 new fans join their Facebook community. With an estimated 31 million Farmville members on Facebook, Bing seems to have hit the nail right on the head with this campaign.