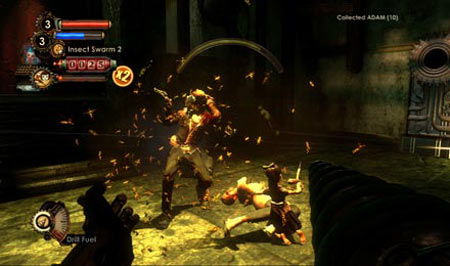 Get ready to return to the city of Rapture and don the hat of Big Daddy as Bioshock 2 will soon receive a new downloadable add-on. 2K Games has announced that it will release an all-new single-player DLC namely Protector Trials in near future. Infused with exciting features, this action-packed series is set to open new windows for a thrilling gaming experience.

In Protector Trials, players will again have to shield Little Sisters from Splicers’ attacks as they collect the precious ADAM from corpses. While doing so, gamers can make use of the entire weaponry from the BioShock 2 tool set to slaughter their enemies. Composed of new confrontational sequences, the add-on has been designed to test players’ expertise with weapons and Plasmids. This would involve intense fighting and swift player movements.

“The team at 2K Marin has been working hard ever since the launch of BioShock 2 to develop ways for gamers to extend their time in the single-player world of Rapture,” revealed Christoph Hartmann, President of 2K. “I’m proud to announce the first of these experiences, the Protector Trials, which takes players back to some of their favorite places from the original game and features some of the biggest challenges that fans of this series have ever experienced. This is just the beginning. More single-player content is on the way that will deliver more of the intense action and story-driven gameplay that fans have been craving.”

Protector Trials comes with new unlockables including never-seen-before alluring concept art and videos. Embedded with six new maps which present three exclusive difficulty levels, users can slay their opponents in some of the most favored locales from BioShock 2. It will also award gamers with seven new Achievements/Trophies.

The company has announced that it will bring out more downloadable content in the coming months. This will enhance the gamer’s single-player gaming experience and allow users to gain more exposure to the bemusing world of Rapture. Narrating the story of the broken utopian world, it will also bring innovative tools and challenges to the fore.

From August 3, 2010 onwards, Protector Trials will be available for a price of $4.99. Gamers can download it from Xbox LIVE Marketplace for the Xbox 360 and the PlayStation Network for the PlayStation 3. Users can also download the game with 400 Microsoft points from Games for Windows-LIVE. Earlier downloadable packages for BioShock 2 namely Sinclair Solution Tester Pack and Rapture Metro Pack can now be downloaded from Xbox LIVE Marketplace, Games for Windows-LIVE and the PlayStation Network.