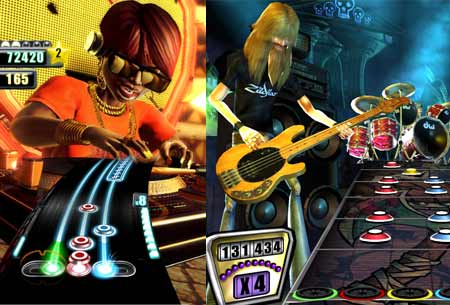 Fans of the acclaimed Guitar Hero and DJ Hero games are in for a complete treat. They can now jam with the likes of Pussycat Dolls, Maroon 5, Lady Gaga, Rihanna and Duran Duran in the form of new downloadable content. Activision unleashes the Pop 1 Track Pack for the Guitar Hero music library and the DJ Hero Dance Party Mix Pack.

The company has unveiled a complete slew of tracks that are expected to get DJ enthusiasts spicing up the party with more spinning, battling and scratching. The DJ Hero Dance Party Mix Pack offers gamers three new mixes. These include Lady Gaga’s ‘Poker Face’ Mixed With ‘Girls On Film’ by Duran Duran as well as Rihanna’s ‘S.O.S.’ beat juggle and Pussycat Dolls’ ‘Buttons’ beat juggle.

Moving away from the DJ ensemble, we see that Guitar Hero fans also have something to rock about. The Guitar Hero music library features three pop artists packed into the Pop 1 Track Pack. This offering includes ‘This Love’ by Maroon 5 and Lady Gaga’s hit song ‘Just Dance’. The third inclusion is the Synthpop hit from Owl City dubbed ‘Fireflies’.

The Guitar Hero Pop 1 Track Pack can be acquired from the Xbox Live Marketplace and PlayStation Store for 440 Microsoft Points and $5.49 respectively. Wii owners can get their hands on these tracks for 550 Wii Points. Each song is also released as downloadable singles for the PS3, Wii and Xbox 360 for $1.99, 160 Microsoft Points and 200 Wii Points.