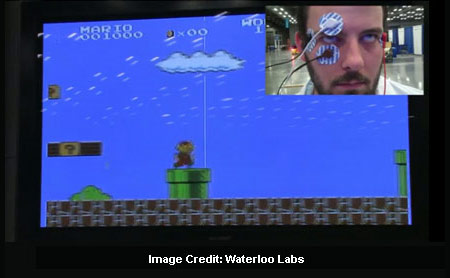 Motion sensing is one interesting innovation of recent times and with its incorporation in almost every advanced gizmo, there seem to be many takers. Now engineers from Waterloo Labs in Austin, Texas have crafted a unique Eye Mario System that allows players to enjoy the popular NES title Mario simply by moving their eyes.

In what looks like a very interesting way to get Mario moving, plain eye movements will enable enthusiasts to control the character’s actions in the game. The Waterloo website reveals engineers to have employed an eye-tracking contraption. This was done with the help of electrodes positioned around each eye.

Tracking the movement of the player’s eyeballs offered an input. A custom circuit in combination with a single-board RIO system was then used to map the obtained readings. It is this mapping that is said to have transformed the eye movements into in-game actions. Yes, all players are required to do is move their eyeballs in the needed direction and the character follows suit.

Allowing players to indulge in any NES video game, a video on the site further details how the system works. No one seems to have reached more than half of level 1-1 of the Super Mario Bros game in the video though. It only seems to reflect how difficult in practical terms it could be to control the character accurately while looking straight at the screen. Nevertheless, it’s an interesting way to play a game.

Though the system isn’t wireless, it seems to say a lot about how the future of controls is shaping up to be. Will gamers soon be bidding goodbye to their controllers?