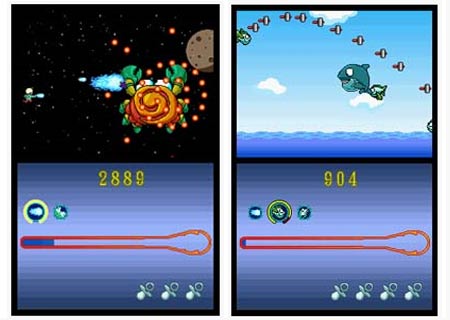 After giving Wii owners the low down on Nintendo’s newest downloadable games for WiiWare and Virtual Console it’s time we turned to DSiWare. This week, DSiWare will welcome Peg Solitaire, Paul’s Shooting Adventure and it’s very own version of Gene Labs from Nintendo.

Circle Entertainment’s Peg Solitaire is a sort of board game where pegs have to be shifted tactically on a cross-shaped board sporting 33 holes. Some boards in this game that can be played by up to two people, employ marbles that are placed in shallow indentations. The title includes five levels containing 41 stages that enable gamers to understand the gameplay techniques progressively.

Super Baby Paul, the Ultimate Pacifier, is the star of this side-scroller shooter by Agetec that’s dubbed Paul’s Shooting Adventure. The single player title’s protagonist is born of a super hero family, which explains his innate super powers such as the gift of flight and powerful projectile energy attack capabilities.

A unique ability also lets Paul take on the appearance of an enemy and wield the weaponry of fallen enemies. Paul has been charged with saving the oceans of Earth from an alien force that has invaded the planet. The mission is to use the protagonist’s powers and the weapons captured from the aliens to protect Earth’s most essential elements.