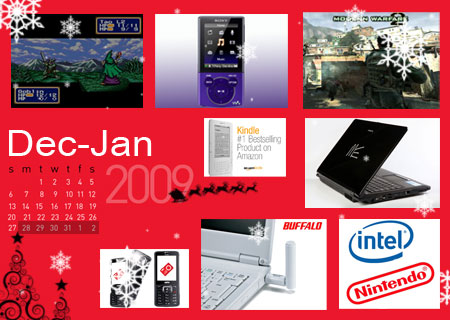 With the words of the popular tune ‘Auld Lang Syne’ still resounding in our minds, we realize that the New Year has finally dawned upon us. The year 2009 gave us some pretty interesting and captivating news items and rumors. This same spirit is seen slowly creeping into 2010 as well. While we do away with the old and ring in the new, we spare a few minutes to reminisce about the week that was.

Amidst all the festivities and pomp and show of ringing in the new year, there were a lot of interesting news that made its way into the tech terrain. Along with the cold, we also saw the likes of some great laptops, mobiles, adapters, games, e-reader as well as plenty of discounts making its way into the week. Read further to see just what made news headlines while you were busy with the festivities and partying.

The stockings of Indian markets were filled with many new devices and discounts brought to the land by popular companies. Up first is Buffalo with its unveiling of the wireless N150 USB 2.0 adapter dubbed as the WLI-UC-GNHP. The device brings portable high-speed wireless connectivity to desktops and laptops which include Windows OS through the USB port.

Spice Mobiles has the perfect thing for all you shutter bugs waiting to capture the true festive spirit. They can do so with the company’s new M-7070 digital camera phone. It comes complete with 8 x digital zoom, auto focus, face detection and anti- shake. All this is packed in a neat looking appearance and bears a price that would surely be easy on your pockets. Sony India made this week truly a month of giving by offering their customers great new year offers. Discounts and special offers were endowed upon devices like Handycam, Cybershot, E-Series Walkman MP3 players to name a few.

The season was truly complimented with just more than just cheer and joy. It was also complimented with HCL’s ME 06 and ME 45 laptops. Amazon Kindle e-reader also contributed to the people’s happiness as it was noted to be the most gifted item in the history of Amazon. We also see the likes of a rumor wriggling its way into this week’s colorful roundup. It appears that the upcoming gaming system slated to release by Nintendo could just feature Intel’s new graphic processor called Larrabee.

With the Sega Mega sale on, you can purchase or gift games from Sega for the Wii system in the Virtual Console segments. The titles sport a 40% discount meaning that all the game that are priced at 800 Wii Points can now be purchased at 500 Wii Points. This sale is on till January 6, 2010. In other gaming news, it was noted that Call of Duty: Modern Warfare 2 was last year’s most pirated game on the PC and Xbox 360.

The week was also graced by 10 Nintendo offerings. These included Castlevania The Adventure ReBirth, Eat! Fat! Fight!, Rabbids Lab and The Magic Obelisk for the Wii while the Virtual Console gets PilotWings. The Oregon Trail, Sudoku Sensei, Glow Artisan, Master of Illusion Express: Psychic Camera and Arcade Hoops Basketball have all been unveiled for the Nintendo DSi this week.

With this we would like to conclude with a statement that is ever so often heard around this time: Out with the old and in with the new! And you can be sure that we will be there to bring all the latest news articles that hit the Tech terrain right to your fingertips. Until then we at TechShout would like to wish everyone a very Happy and Prosperous 2010.