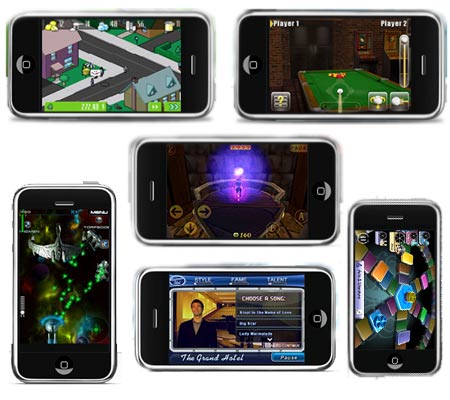 With the Star Trek, EA Mobile allows gamers to captain the U.S.S. Enterprise while fighting against the Klingons, Cardassions and Vulcans. The all new space adventure is based on the world famous Star Trek franchise and even coincides with the release of the latest movie directed by J.J. Abrams. Bundled with many diverse and exciting gameplay scenarios, players will be up against enemies from all over the galaxy.

American Idol for iPhone and iPod touch, as the name suggests finds its roots on America’s popular TV show. The personalized adventure game lets players experience a season of the show. Players can get up close and personal with more than 15 full motion actors including a personal stylist, the judges and other contestants. Allowing players to test their skills with the device’s accelerometer and touch controls, the game offers busy rehearsal schedules with an exciting social life.

The next title namely Lemonade Tycoon is EA Mobile’s first free ad-supported title for iPhone and iPod touch. A cool twist on business simulation games, players are the boss as they get to manage their lemonade business. They can choose from various locations, recipes and even make advertising decisions while selecting the right staff. Players even get to control the weather and can save up to six games at one go. With a Career Mode and the 30-Day Challenge Mode, they get to deliver their juicy goods to unique customers with interactive personalities. Besides players can also listen to their own delicious iTunes library while they play.

“EA Mobile games have consistently been top performers in the App Store’s Top Paid rankings and their revenue performance has been even more impressive,” commented Adam Sussman, Vice President of Worldwide Publishing for EA Mobile. “We are excited to expand our offerings to include these six new games, joining our all-time top-selling apps, including MONOPOLY Here & Now: World Edition, Tetris and the recently released Need for Speed Undercover and Tiger Woods PGA TOUR.”

Hasbro’s popular trivia game Trivial Pursuit offers players over 3,500 text and picture questions. Revamped for mobiles, this classic board game incorporates stunning 3D graphics with rich sound effects. The intuitive touchscreen controls along with Wi-Fi capability allows connection of up to four players in the Pass and Play mode.

The classic platformer Pandemonium now enables iPhone/iPod Touch users to enjoy the best antics of the hilarious combo of Nikki and Fargus! The fantasy game unfolds as heroine Nikki who is a wizard-in-training unknowingly casts a spell that unleashes the horrible monster, Yungo. As the monster is ready to swallow the entire village, Nikki and her wise-cracking jester friend, Fargus in tow with his puppet, Sid set out to make a ‘boon’ at the Wishing Engine. Hoping to save everyone, users need to tap the screen to play as either Nikki or Fargus. The game is packed with 60 levels of danger, fun and adventure.

Finally EA Mobile’s Anytime Pool gives players an opportunity to become the world champion pool player. Providing a realistic pool experience, users can hear the crack of the Cue Ball or watch the sink of the Eight in the corner side pocket. Technical tricks and slick moves should allow players to enjoy the game solo or with Facebook friends.

All six titles for the iPhone and iPod Touch are available now through the Apple iTunes store. While Star Trek, American Idol and Pandemonium are priced at $2.99, the Trivial Pursuit and Anytime Pool cost around $4.99. As for the Lemonade Tycoon its available as a free download.