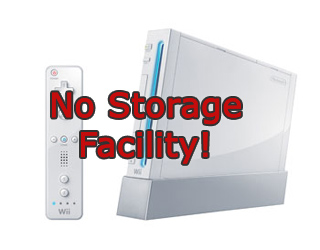 Undoubtedly Nintendo Wii is one of the most popular gaming consoles in world, it’s been on a record breaking spree ever since its release. The games on the Wii attract all sorts of people and age group. But that does not mean gamers are totally happy with the console.

Recently we reported about Wii gamers being miffed at Nintendo due to the lack of hard-core games for the console. Simultaneously gamers are unhappy about the absence of storage facility in the Wii.

Nintendo is aware of this and is said to be working on resolving the issue. Nintendo president Reggie Fils-Aime told MTV that “It’s an issue we are aware of, and we’re working to find a solution, and we will,”

However as of now it is unclear about what steps Nintendo intends to take to fix the storage issue.

Wii’s other competitors Xbox 360 and PlayStation 3 boast the storing capacity of different sizes. On the other hand all that Wii has is 512MB of internal flash memory and SD card slot.