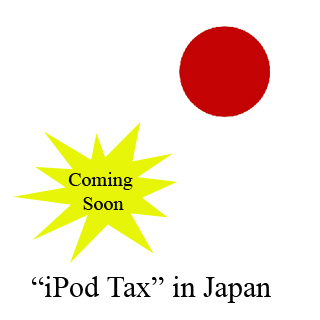 Apple’s iPods and several other media players may soon be levied a tax. Japan’s Cultural Affairs Agency has proposed that the government should charge a tax fee to all media players and recorders that include a hard disk for storing media.

The key intention behind the clamping of the tax is to recompense right holders, which include recording companies, songwriters and artists, who suffer due to the rampant digital media piracy.

This extra fee would be on the lines of what is charged on the price of blank recordable media and products.

Though the Agency of Cultural Affairs has not yet decided the amount of the fee, it could roughly be about 100 yen (95 cents) per device for an annual total of about 1 billion yen (about $9.5 million), according to the Asahi Shimbun. However, the tax will not be in its form of implementation until 2010 at the earliest.

A similar copyright fee is already imposed on several older devices such as DVD burners and minidisk players.

In fact, way back in 2005, Japan’s recording industry had practically imposed the “iPod Tax”. However a government committee failed to reach an agreement on the issue.