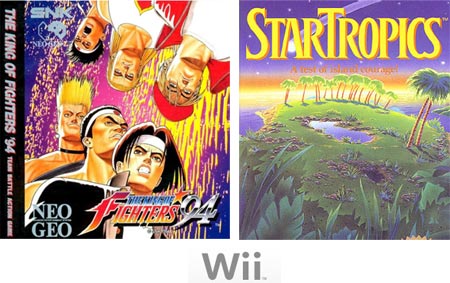 Now that we’ve stepped into a new year, Nintendo is offering Wii owners a chance to take a trip back into the past. The latest additions to the Wii Shop Channel include two vintage games from the 20th Century! They are ‘Star Tropics’ and ‘The King of Fighters ‘94’.

Star Tropics (1 player, 500 Wii Points): Find out just how resourceful you can be in this classic game, with its mixture of adventure and RPG elements. Step into the shoes of Mike Jones, a teenage star pitcher from Seattle who has come to the tropics to visit his famous archeologist uncle, Dr. Jones. After being told that his uncle has been abducted, Mike begins a perilous quest in order to rescue him and figure out the mysterious plot behind his disappearance. Luckily for Mike, he meets helpful villagers and finds more powerful weapons as he explores numerous locations and island-hops using his uncle’s submarine.

You’ll never know what to expect next as the cosmic story unfolds over the course of eight action-packed chapters, ranging from Dr. Jones’s lab on C-Island to an alien spacecraft. Who knew a tropical vacation could turn into a mission to save the world?

The King of Fighters ’94 (1-2 Players, 900 Wii Points): As the first game in the long-running KING OF FIGHTERS series, THE KING OF FIGHTERS ’94 brought together popular characters from other well-known franchises and pitted them against each other. Match warriors from Fatal Fury against favorites from its sister series, Art of Fighting. Or see if the casts of the Ikari Warriors and Psycho Soldier series better suit your fighting style.

Plus, there’s a set of brand new characters, exclusive to the KOF series, who are willing to join the fray. But there’s a twist: Instead of the standard best-two- out-of-three-rounds fight setup, players choose one of eight teams, each made up of three teammates.

To win, all members of the other team must be eliminated before your fighters are knocked out. Use the game’s power gauge to inflict maximum damage and end the round with a devastating finishing move. It’s a battle royal unlike anything else-a game whose inspiration is easily seen in the fighting games that followed it. Can your team be the last one standing?

Star Tropics and The King of Fighters ’94 have already gone live on the Wii Shop Channel.